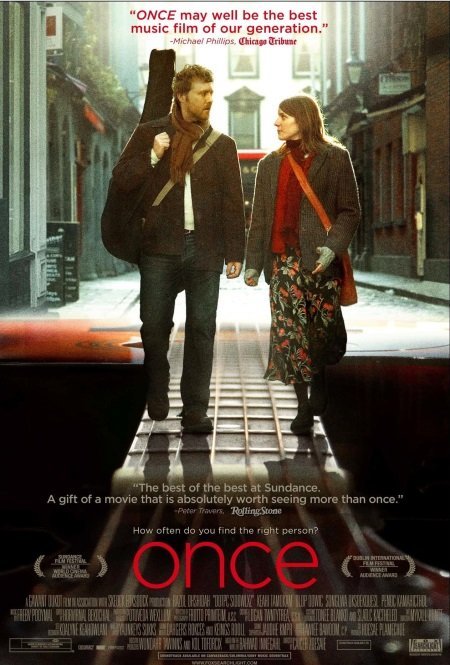 Plot: The Guy (Glen Hansard of The Frames) and the Girl (Marketa Irglova) meet as they each try and make a living on the streets of Dublin, he playing his guitar and she selling flowers. They find a connection through their musical instruments, and by playing around in a store, they find that they, quite literally, make beautiful music together. -- noseatbelts

John Carney's musical debut is a bitter-sweet symphony of powerful storytelling and sensational music that his films are known for.

Once is one of those films that so perfectly captures a mood and moment - in this case, the joy felt by creating a true piece of musical art. The film tells a love story, very simply and directly, but also one that plays at themes of creation of art and music. The acting is direct, the storytelling realistic, and soundtrack incredible.

One of the smallest films you'll ever see packs the largest emotion punch you can imagine. The cast is small, the camera work looks to be hand held, there's not much of a score or huge production backgrounds, so in order for the film to succeed it has to have great acting. Hansard and Irglova have probably some of the strongest chemistry I've seen between two leads and the film builds on emotion as the two's passion for music fuels their relationship. Avoiding all cliches you'd normally see in a movie like this, combined with great vocals from it's leads, Once is a modern musical of sorts that will leave you appreciative of what a film can accomplish when it doesn't rely on A-list stars, dazzling special effects, and a budget in excess of 50 million. Definitely not one to be missed.

A simple but thoroughly engaging film. Even though I bought the soundtrack months before I've seen this film, the songs are more powerful when I actually saw the actors perform it. Even though it's a small movie, it delivers a big wallop because it tends to wear its heart on its sleeve. I enjoyed some of the film's grainy look, shaky camerawork, and toned down dialogue. This is the kind of picture that thrives on the experience rather than technical workings. Even though the ending was extremely sad, looking back on it, everything was in perfect harmony, like most of the songs that came out of this film. One can tell that the two characters cared for each other but it doesn't feel staged or forced. The film's organic nature elevates its quality and therefore it is the kind of movie that …

No posts have been made on this movie yet. Be the first to start talking about Once!