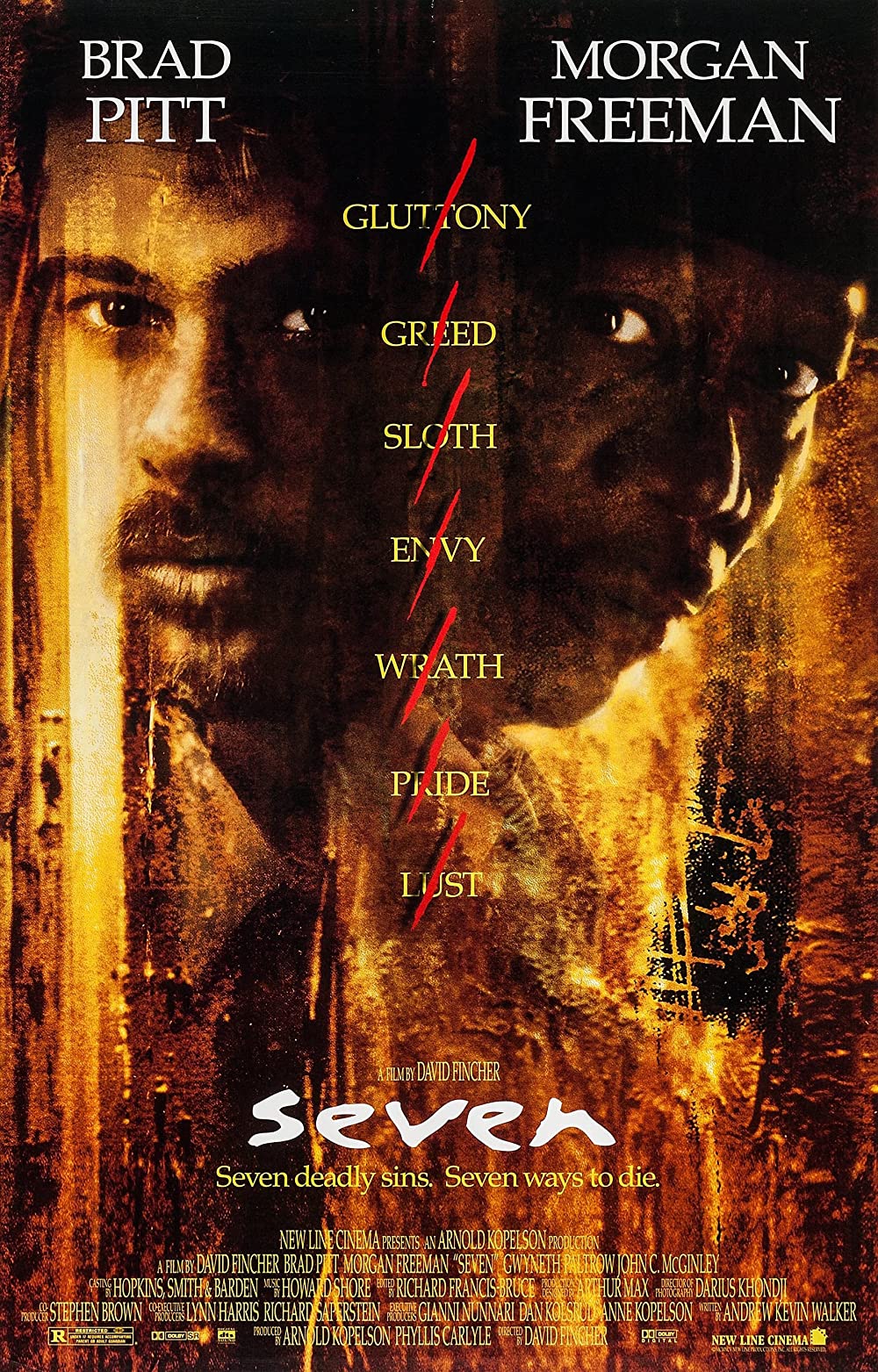 Plot: A retiring officer and his soon-to-be replacement track a serial killer who is using the seven deadly sins as his guide.

A very disturbing, intense mystery film from near flawless director David Fincher. There's nothing like it.

Dark, disturbing and occasionally gory, Seven is a psychological thriller that is among the bleakest films in mainstream cinema history.

The world is a fine place, and worth fighting for.

What makes Se7en so brilliant is because at the time of release, no one expecting it to be any good.
In fact, a lot of people were anticipating it to be terrible, and then David Fincher and Andrew Kevin Walker's genius traits did the magic, and every mouth dropped.

Fincher is one of my favorite visual directors, and his visualization of humanity is so pessimistic and fascinating, it makes me sick to my stomach.
Every prop, every street, every detail of the set shouted ugly and hopeless, and when something as simple as the plains of a desert can induce that, it has my highest praise.
It's practically a prelude to Fight Club, tackling everything in general first. The homeless, the murder, the prostitution, the crime overall and of course the sin of human.
I especially liked the …

A retiring detective and his young successor investigate a series of bizarre murders based on the seven deadly sins. The lukewarm reception for David Fincher's debut Alien 3 resulted in most writing him off as another style over substance hack from the MTV generation, but boy did he learn from his mistakes. No-one was expecting his follow up to be much of interest; let alone a virtual modern masterpiece. Fincher had clearly been studying the stylistic hallmarks of Ridley Scott, and the dark, brooding atmosphere crossed with artistic visuals are very much in his tradition. Although the formula of world-weary educated gentleman cop teamed up with a young hot head is hardly an original one, excellent performances and intelligent writing steer the material clear of cliche, and the imagery of …

A film about solving a gruesome murder using the 7 deadly sins (each victim symbolizes gluttony, greed, pride, sloth, lust, envy, and wrath). The retiring Detective William R. Somerset (Morgan Freeman) teams up with the up and comer cocky cop David Mills (Brad Pitt). Detective Somerset is invited to meet Davidâs wife Tracy (Gwyneth Paltrow) and eventually informs him of plans of having an abortion. William consoles Tracy by doing the best thing by not informing her husband, and to âsoil the child every chance you getâ if she decides to keep it. John Doe, the criminal mastermind, eventually surrenders himself at a police station. Great lines from the picture: William Somerset â âErnest Hemingway once wrote: "The world is a fine place, and worth fighting for." I agree with …

Top 8 Horror Films of the 1990's by Stoney McStonerson

No posts have been made on this movie yet. Be the first to start talking about Se7en!