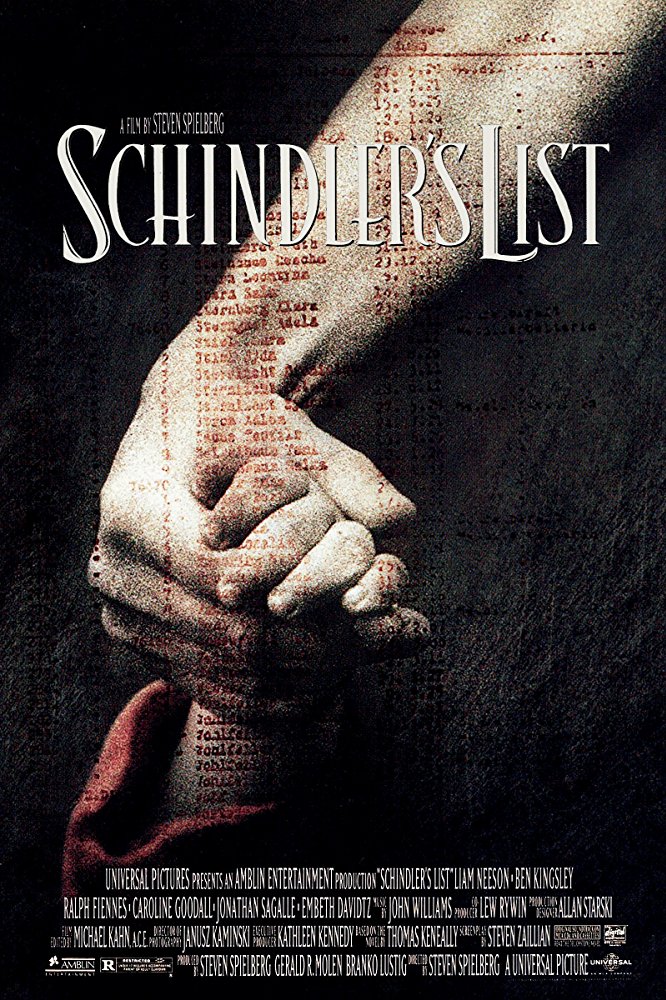 Plot: Schindler (played by Liam Neeson) tries to save the Jews by bringing as many as he can to an ammunitions plant that may not produce any ammunition.

Steven Spielberg's astonishing Holocaust masterpiece celebrates doing what is right in the face of adversity and decries wickedness.

As unbelievable as it may sound from me, I must applaud Spielberg's mainstream boldness for bringing to the big screen his last masterpiece: a strong and accurate portrayal of the horrors of the Holocaust. This is Spielberg's attempt to outdo himself, and he is successful at it. Liam Neeson at his best role and a powerful black-and-white cinematography make the tiny probability of the popular opinion, the Academy and my perception to coincide so perfectly, possible. 96/100

This is a greatly made film, by some greatly talented individuals. A true cinematic wonder, at times. It almost feels like you are transported back to this exact time and place. There's no attempt to dramatize the story. It has an unrelenting real-world feel to the actual horrors that took place. The acting across the board is great. But, for me, the show stealer is Ralph Fiennes. Wow! I've always been an admirer of his talent. Personally, I only feel that it comes short of a 4 Star rating because of the seriously slow start. I don't think a good handful of scenes throughout are completely necessary. I would be even more into the story if they'd been left out. Other than this small annoyance, the film is impeccable.

When one individual sacrifices personal safety and wealth to save the lives of others, the story must be told. It takes courage to stand up for humanity, and there have been heroes who have done so throughout the course of history. The Holocaust was a gruesome time in history when a powerful government was on a mission to take the lives of millions of innocent people. Although there were many heroes during this tragic era, one heroic man in particular became the focus of a feature Hollywood blockbuster: Oskar Schindler. The making of Steven Spielbergâs Schindlerâs List was a necessity.
In 1932, the Nazis became the largest political party in Germanyâs Parliament. The Nazi political majority would become the root of one of historyâs most infamous tragedies. Initially, the German …

Perhaps the hardest movie I tried sitting through.

I've actually yet to finish this movie because I find it so emotionally distressful. I've started it at least three times but I always stop at the halfway mark of its running time. The Holocaust was the greatest moral failure of the 20th century and among the worst crimes against humanity in recorded history. Schindler's List pulls no punches like later films such as Saving Private Ryan, Hotel Rwanda, and 12 Years A Slave in order to make modern audiences feel better about themselves. At the same time, it's a fantastic story with some of Steven Spielberg's finest directorial work to date as well as featuring Liam Neeson's best performance of his career. Ralph Fiennes is abit hammier than I'd expect him to be; there are scenes where he is so evil (accurate as it my be) that his character …

We see a Polish town, a wide shot in a street. Soldiers run up and down, tearing children away from their parents, executing resisting inhabitants and vandalizing the buildings.
Suddenly, a little girl comes out of one of the buildings and starts wandering down the road lined with mayhem.
She is wearing a red coat.
The film isn't in color. But we see the color of her coat.

Schindler's List is a movie that I find hard to call a movie. Usually, movies are fun and uplifting, made for entertainment. But once in a while comes along a film that is more than entertainment. It is heartbreaking filmmaking.
Schindler's List is more an odyssey than a movie. It is the truth. A part of history, telling the story of a Nazi who took pity on the Jews and helped them, because no matter what anyone …

No posts have been made on this movie yet. Be the first to start talking about Schindler's List!