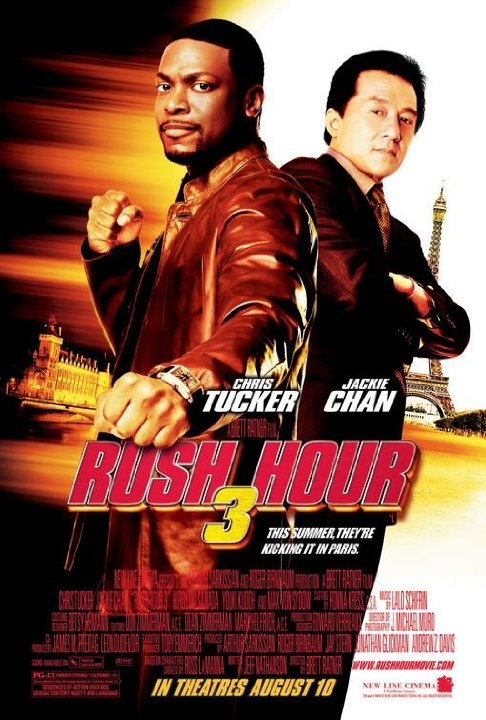 Plot: America's favorite LAPD and China's best Chief Inspector are back after 6 long years. This time going to Paris to fight a Chinese organized crime family, the Triads.

The only good thing about this movie is Roman Polanski getting punched in the face by both Chris Tucker and Jackie Chan. It serves him right.

A definite dip in quality. Not as entertaining as the first two. Everyone just looks like they are going through the motions.

Definitely NOT as good as the 1st 2.What a shame!

The simple formula of the good guys, the bad guys and the girl(s) in between. I have nearly forgotten the first 2 Rush Hours, but they have come back to me now, and even better. Funny man Tucker teams up with Chan to stop the bad guys and save the girl(s). It starts off with a nice pace and keeps the formula going with Tucker making a fool of himself and causing damage, while Chan balances this with seriousness and calculation. Tucker comes along and just messes with his head, and entertains me in the meantime. Tucker does look a little bit funny being funny now that he is after bulking up, isn't humour a defence for someone who can't physically defend themselves? Casting still managed to find somebody twice his size all the same.

The plot is simple but well scripted, the main …

Old school comedy at its best

Ah yes, another serving of fun and hysterical laughs courtesy of loud-mouth LAPD cop James Carter and Ace Detective Inspector Lee. Its been a long time coming for this third installment to come about, because it nearly took 6 years in the drawing board. But definitely it was worth the wait. Chris Tucker reprises his role as we know him from his other roles as a loud or rather very loud skinny black dude who likes to talk his way out of trouble. And Jackie Chan the original drunken master himself as Inspector Lee was not bad himself in this third serving. I remembered 8 years ago, I was talking to my classmate who had just seen Rush Hour and he said he almost pissed his pants laughing so hard. But then way back then I hadnt seen it myself so I pretty skeptical about how funny it was. Then …

No posts have been made on this movie yet. Be the first to start talking about Rush Hour 3!