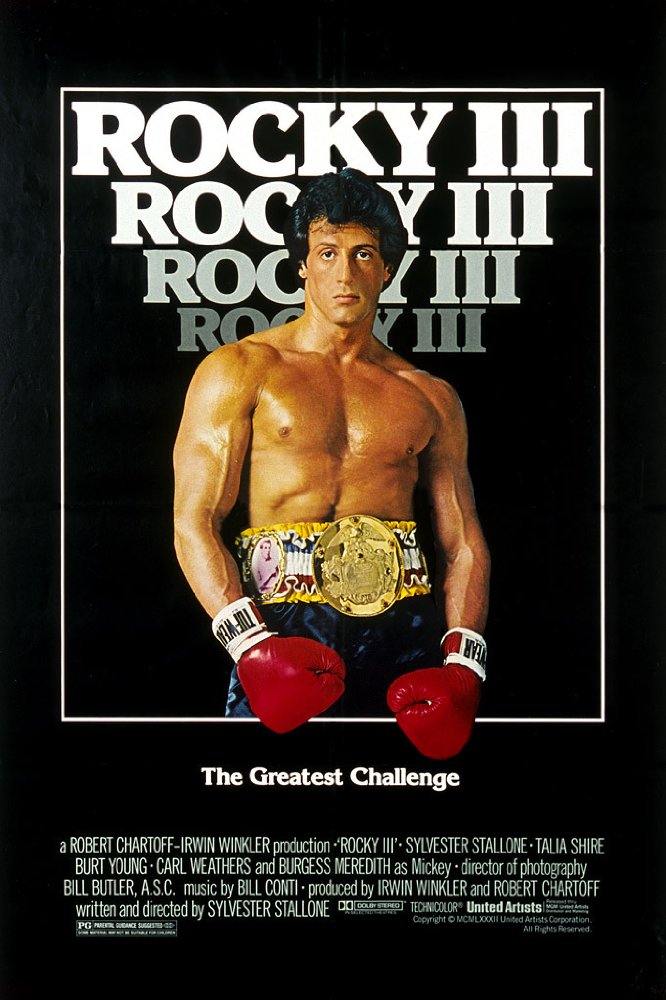 Plot: The beloved Rocky is challenged by a loud-mouthed boxer. -- sapien

"The eye of the tiger". The beloved Rocky is challenged by a loud-mouthed boxer. This movie has a Bad-ass villain and a sad scene in the middle.

The film that saw the Rocky series ditch any attempt at subtlety or depth and adopt the now familiar formula. On the plus side, MR. T!!

Rocky (Stallone) plans on retiring but is taunted by Clubber (Mr. T). The humor was emphasized with outrageous scenes during the training. Insults from Clubber were too much and the new training gym was just unbelievable. Mickey Goldmillâs (Burgess Meredith) demise was depressing and Apolli getting soft on Rocky was a bit ludicrous. One of the lines that sum up the film - Adrian â âWhy youâre human arenât you?â It shows that Rocky can become vulnerable and a worthy and fierce foe like Apollo can be a friend. The picture was a bit over dramatic, sappy and overdone. Rocky should definitely have ended in Rocky III.

Rocky III is a classic film in a variety of ways: It is Mr. T's first acting role and most iconic, it's theme is the famous song "Eye of the Tiger" by Survivor which debuts in this film, and its the most action-packed Rocky film. This movie has a unique strength and weakness in the franchise. Rocky III is direct and to the point; there is rarely an unnecessary scene in the film. It always has something eventful occurring. The problem is with the human interest scenes for Rocky and his relationships with his wife, trainer, and Apollo Creed. While Rocky I and II did a great job providing character understanding and sympathy, Rocky III tries briefly and fails. This Rocky is the action filled fun Rocky, not the heartfelt underdog story of the first two. Rocky III is a very fun film that is …

Almost loses "The Eye of the Tiger" itself

"Rocky Balboa" (Sylvester Stallone, who also wrote and directed the movie), the Professional Boxing World Heavyweight Champion, is living the life he sought. He lives in a huge house with his family, has been on the cover of various magazines and has numerous endorsment deals. However, unknown to him, he has gotten soft inside the ring to the point where his manager, "Mickey" (Burgess Meredith) booked him in bouts with inferior fighters. Even getting in the ring with the cocky professional wrestling star, "Thunderlips" (Hulk Hogan in his acting debut).

He lost his edge, and "Mickey" knew it. However, the champ wouldn't believe it. He even went against "Mickey's" orders, and accepted the challenge of "Clubber Lang" (Mr. T in one of his most famous roles), a tough, bad attitude boxer …

No posts have been made on this movie yet. Be the first to start talking about Rocky III!