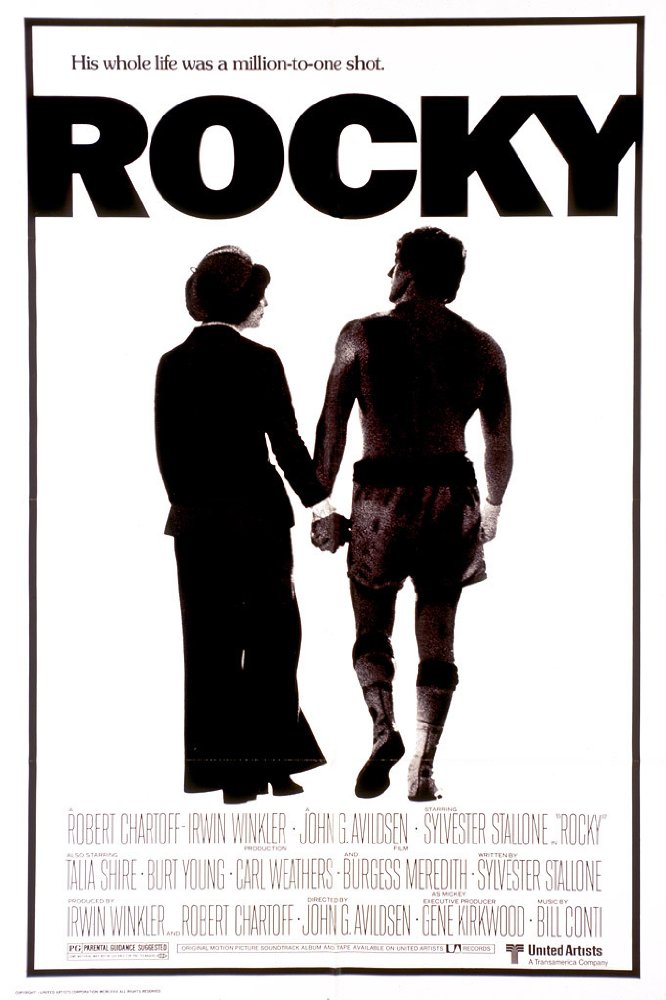 Plot: A undersized and underfunded heavyweight challenges the long time heavyweight to a fight after being the underdog in many of his fights. He struggles to balance his training with his personal life and confidence.

The first sports picture to win Best Picture, "Rocky" has always been an iconic character piece.

It's impossible not to look at this classic like... a classic. It's completely American, it's Sly, it's underdog perseverance, romantic melodrama, ice skating, the endurance of love relationships, and still I approve. Some scenes haven't been duplicated nowadays. I'm not particularly fond of Rocky's character, but it is irresistibly empathetic towards most audiences. 85/100

A undersized and underfunded heavyweight challenges the long time heavyweight to a fight after being the underdog in many of his fights. He struggles to balance his training with his personal life and confidence. Epic soundtrack and a hero that can't speak right.

I'll admit, it took me this long to actually see this film start to finish in one sitting. Everything is great about this film, the casting, the acting, the script, the cinematography, the direction, everything. But, it should not have won best picture. I repeat, not won best picture at the Academy Awards.

Throwing out Bound for Glory, I've never seen it, and quite frankly never heard of it, this year had 4 huge movies vying for Best Picture and the Academy chose wrong. All the President's Men was great, but I'm not sure if it was better than Rocky, but clearly Network and Taxi Driver were better films and in today's world of reality TV, you could argue that Network was quite prescient. This could be my next blog post...anyway Rocky is good, I'm sure I was probably the last …

A simple-minded but good natured nickel and dime prize fighter is given a shot at the title by the overconfident champion as a publicity stunt. The original Rocky is another example of a film that has become overshadowed by its legacy, and the franchise has become a glowing example of everything that's wrong with the studio system. The increasingly laughable and simplistic sequels ignored everything that was good about the original, which was really a story of the underdog who is given a chance at self respect and escape from his hope-free existence. Balboa was obviously influenced by Terry Malloy from On The Waterfront and Stallone's acting talents are clearly well suited to this shambling, self conscious and inarticulate character; the dialogue is repetitive and ineloquent, but that …

A loan shark enforcer by day, boxer by night, Rocky Balboa (Sylvester Stallone) is given a shot to fight for the heavy weight title. Apollo Creed (Carl Weathers) is going to be his opponent and endorses a fight with an underdog with a catchy nickname âThe Italian Stallion.â Paulie (Burt Young) is Rockyâs friend who helped in the training. Mickey Goldmill (Burgess Merideth) also assists Rocky in achieving his goal. Adrian (Talia Shire), the sister of Paulie, becomes involved with Rocky. Some nice lines from the picture: Rocky - âI'm gonna know for the first time in my life, ya see, that I weren't just another bum from the neighborhood.â âI just want to say hi to my girlfriend, OK? Yo, Adrian! It's me, Rocky.â Paulie â âGo out and live, enjoy life...I want ya outta …

No posts have been made on this movie yet. Be the first to start talking about Rocky!