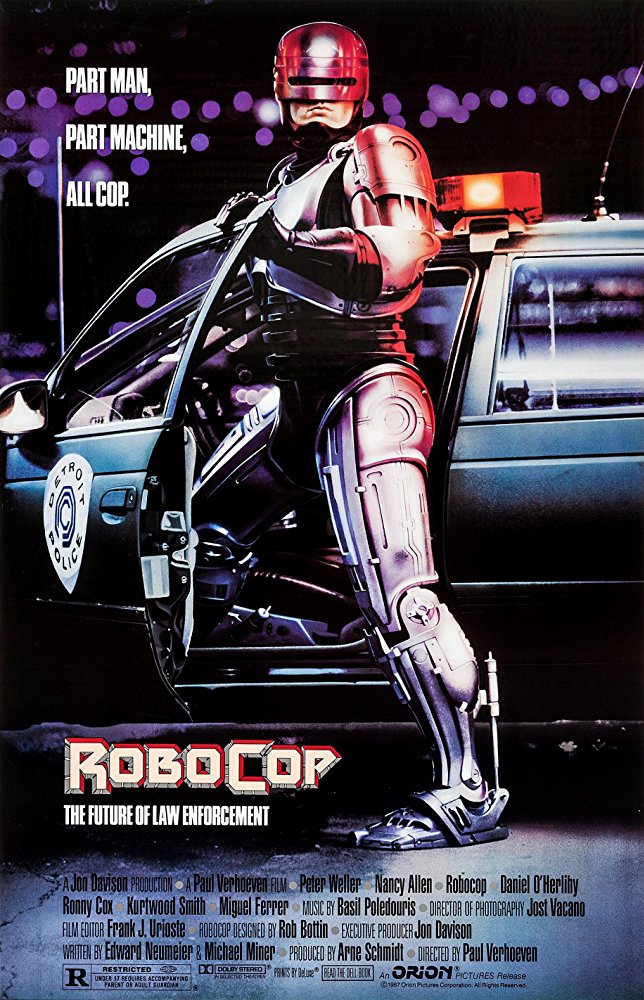 Plot: The future Detroit is plagued by crime and the police are threatening to strike. When an officer is brutally shot down, a corporation steps in to create the ultimate in law enforcement: part man, part machine: Robocop.

A savagely violent and still greatly relevant attack on 80s domestic policies, "RoboCop" has lost almost none of its luster.

Paul Verhoeven's ultra-violent blend of science fiction, action, and social commentary on top of social commentary remains relevant as cooler-room topical importance-and better than the well-intentioned but misguided 2014 remake. Unlike Joel Kinnamen, Peter Weller gives off the impression that RoboCop once had a human personality and conveys varying emotions well enough under all that makeup and costuming. Ronny Cox and Kurtwood Smith are having an absolute ball as the cackling bloodthirsty villains. The choreography of the action scenes is not as impressive as it might have been back in 1987; they still use stop-motion animation for some effects.

Memorable music as well as a good performance by Peter Weller, very well-directed action sequences by Paul Verhoeven. It falls out of place at some parts and the plot has more holes than there are gunshots holes in the movie, but on the surface it's good 1980's action fluff.

"Dead or alive, you're coming with me"

Peter Weller stars as Alex Murphy, a veteran cop in the city of Old Detroit who is sadistically tortured and shot in the line of duty by Clarence Boddicker and his gang of truly hateful criminals. Kurtwood Smith's character is clearly an evil man, with no remorse or guilt for his ruthless actions. After Murphy is considered dead, an organization called OCP combines the biological flesh of his body with steel, circuitry and a fistful of attitude and brings back to life, but not as a normal human being, `Robocop,' half human, all cyborg. Good for Detroit, bad for criminals, especially Boddicker and his gang. Because somewhere deep inside of what's left of Murphy, is a glimmer of memory. And Boddicker's face was the last thing he ever saw.

A dedicated police officer is declared legally dead and reawakens to find that he has been transformed into a cyborg by a malevolent corporation. On the surface of it, Robocop looks like just another dumb sci-fi action film but beneath lurks a lot of clever ideas. The concept of an ultra violent law man operating in a near future society in which big business and gun culture has gone mad owes an obvious debt to British comic book Judge Dredd, as does its black humour which mocks media sensationalism and dumbing down in the amusing news soundbites that punctuate the story. It also contains shades of Frankenstein as the unfortunate cop comes to terms with the fact that he has been transformed into an inhuman monster by corporate interests that have exploded so far out of control that human …

New Detroit police officer "Alex Murphy" (Peter Weller) has been tranfered to a precinct in one of the most violent parts of town after the on-duty death of another cop.

During the hunt for wanted criminals in their hideout, an abandoned factory, "Murphy" is shot and killed. Upon his death, the "Omni Consumer Products (OCP)" obtain his body and intergrate it with the most advanced technology available to create a crime-fighting cyborg codenamed "RoboCop".

Eventually, humanity overwrites programming, as "RoboCop" begins to remember his former life as he continues to fight crime. He also has to deal with the possibility of being replaced by a non-cyborg machine as a replacement, which is strongly supported by a high-ranking OCP executive.

The first things you will notice about …

No posts have been made on this movie yet. Be the first to start talking about RoboCop!