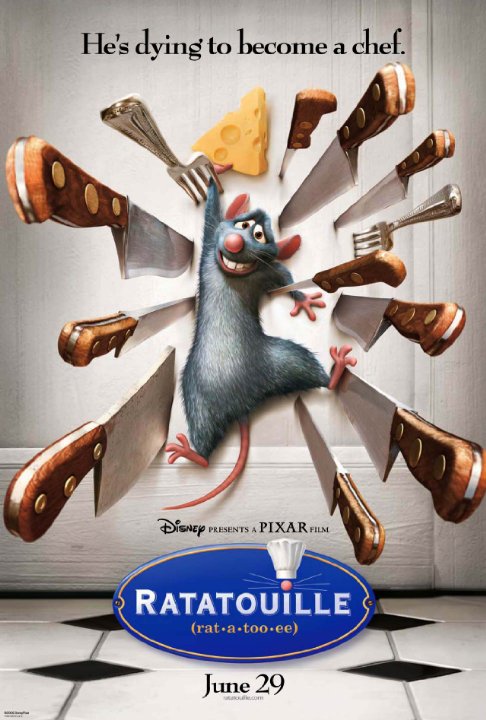 Plot: Remy is a rat who wants to be a chef but no none believes a rat can be accepted in a kitchen.

Remy is a rat who wants to be a chef but no none believes a rat can be accepted in a kitchen. This movie as good animation and great writing, Brad bird works in strange and funny ways with he's movies.

This was a good movie. I did find it be weaker than some of the better PIXAR movies.

The only problem with him living out his tiny dream is no one in Paris or anywhere else on the globe are ready to accept a nasty street rat into their kitchens. Upon stumbling upon the best in restaurants that Paris has to offer in the form of Gusteau's Remy sneaks …

A gifted rat named Remy stumbles accidentally to Alfredo Linguini, the son of his inspiration Auguste Gusteau. Remy dreams of becoming a chef and Linguini becomes popular of his little friends talents. The score is very noteworthy and the CG just stunning especially in the sewer scene where Remy got separated and the details of food in the restaurant's kitchen. The only thing I noticed was how the movie didn't delve into how Colette really "liked" Linguini, how pulling ones hair can control him and the lack of humor compared to other Pixar gems. Screenplay was good: Anton Ego - "The world is often unkind to new talents, new creations. The new needs friends." Lingini - "I need this job, I've been in so many." An Academy Award winner for Best animated feature has themes of family, …

A pretty cute movie, but no real good laughs

"Remy" (voiced by Patton Oswalt) is not your typical rat living in France. He literally has the nose of a great chef. He is able to determine what is in a dish, and is able to tell that a dish needs something to improve it just by the scent.

His family doesn't understand because, let's face it, they're rats. He gets inspiration from a popular human chef (voiced by Brad Garrett) who believes that anybody can cook. and looks for a way to show off his talent.

He finds a garbage boy (voiced by Lou Romano), and uses his hands (by literally controlling the human's arms by pulling his hair as if they were connected) to create his creations that brings "Gusteau", the restaurant named after and once owned by the late master chef the rat idolizes, back to the popularity it once had. …

No posts have been made on this movie yet. Be the first to start talking about Ratatouille!