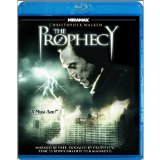 Plot: The Archangel Gabriel tries to win the war in heaven by killing a man on earth and taking his soul. -- sapien

For the type of movie this one is, it's a good movie. It definitely has an apocalyptic quality to it that works.

"The Prophecy" by Yojimbo

The two sides of an angelic civil war hunt for the soul of a war criminal who may tip the balance of power in a backwater town in Arizona. The Prophecy slipped under the radar at the time because it was a straight to DVD release, but don't let that put you off. Rather than big budget effects and star names, the strengths of this film are in its excellent cast, strong concept and some smart dialogue making for an entertaining off beat thriller. Very much in the vein of the X-Files, The Prophecy combines a police investigation with religious mythology and the supernatural and features some nice Tarantino-esque humour. Christopher Walken's trademark charisma and eccentricities make him perfect for the part of a malevolent angel and Viggo Mortensen makes a memorable Lucifer. This of course …

One of my absolute favorite movies ever!

I love this movie! While I never really find movies horrifying this one was just brilliantly done. Of course Christopher Walken being one of my favorite all time actors playing the role of Gabriel the ArchAngel makes the film that much more gratifying. The film is about an Angel named Simon that retrieves a soul from a man that is so cruel that both the angels and satan are trying to claim the soul so that they can finally tip the balance of life away from humanity and finish the Angelic war that began in heaven centuries ago.
Simon knowing that he will be hunted for the soul hides it inside the body of a little girl named Mary. Gabriel will stop at nothing to get the soul, and after killing Simon to find the location, he finds that he now has a detective named Thomas Daggett looking …

No posts have been made on this movie yet. Be the first to start talking about The Prophecy!