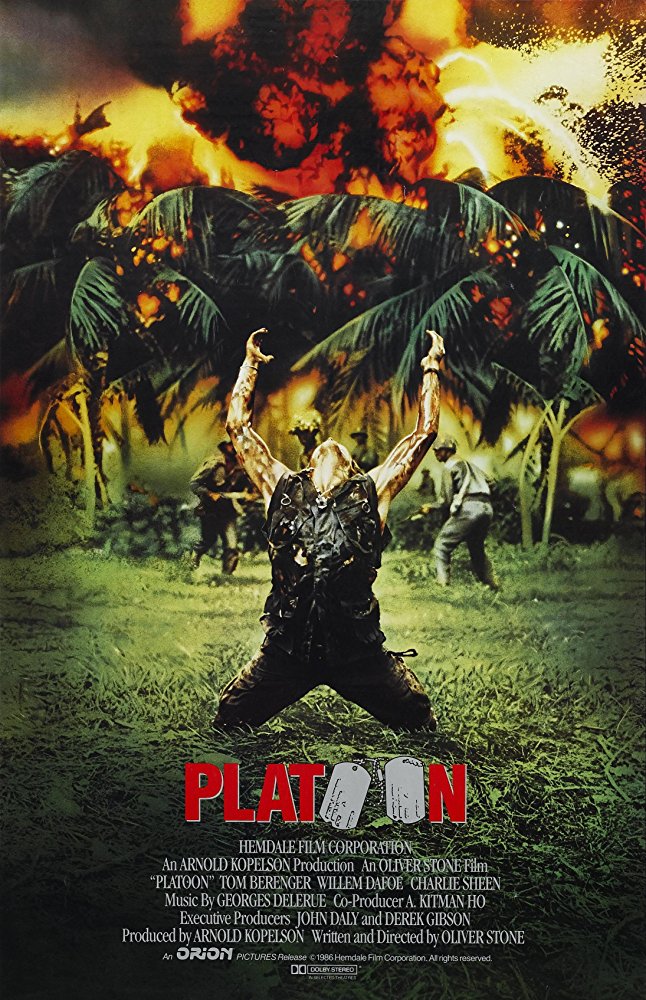 Plot: A young man is sent to the Vietnam War where he explores the reality of moral dilemmas, friends dying, and searching for a reason for it all.

A movie about how combat corrupts humanity, all the bleakness and destruction in "Platoon" are heavily influenced by Oliver Stone's first-hand experience of Vietnam.

Oliver Stone's best and most powerful effort about the Vietnam war. Excellent film. 91/100

This movie is about a young man is sent to the Vietnam War where he explores the reality of moral dilemmas, friends dying, and searching for a reason for it all. This touching war drama as everything that I love. The characters and the acting was brilliant. Oliver Stone did a damn good job directing this film, and lets not forget the score in this movie, how can I put this down in words. Moving, breathtaking and so beautiful.

First, i want to say that i don't know much about conditions in vietnam war and therefore i don't know how true this film is . However it is well known that there were undisciplined soldiers in that war, was it so much as it is shown in this movie, i dont know.
Also i have to say i dont really like Oliver Stone but noone can deny him few brilliant scripts he made at the begining of his career (Scarface, Conan). Among these good Oliver stone movies is Platoon. As i said before i dont know how accurate it is but i definitly can imagine that these things happened. And they are shown pretty well.
Battles are ok, some are very intense, later nothing special. Just not intense enough (maybe budget?). Characters are smartly written. Idea is good but script is just ok, but its not amazing like …

Viewing this again just makes you appreciate how great a director Stone is and how horrific and heart wrenching it is to be part of a war. The film starts off slow with an ambush at night and a bonding of troops. it gets interesting after the booby trap explosion. The platoon consists of the humane Sergeant Elias (Willem Dafoe), austere Staff Sergeant Bob Barnes (Tom Berenger), Chris Taylor (Charlie Sheen), Sergeant "Red" O'Neill (John C. McGinley) and many more.

Its elegant score and detailed direction were sensational. Performances were sincere despite the number of quality stars as supporting roles like (Depp and Whitaker) and scenes very realistic. Staff Sgt. Barnes - âTake the pain.â Chris Taylor â âDay by day I struggle to maintain not only my strength but also my …

Graphic realiztion of the Vietnam War.

This film is timeless and describes the reality of the Vietnam war better than any other. This film is not hollywood and it is not surreal. It is reality. The film does try to be black and white and is not afraid to show the complexities facing fighting men in Vietnam. However, the real greatness of this film is in the gritty realism of the characters. Stone gathered a great and diverse collection of actors. Each character well developed and unique. In deed, the viewers are allowed to look at these characters and choose which one best represents them and in that, perhaps sees how they might have done in Vietnam. Charlie Sheen's character is innocence, heading for war. When he arrives in Vietnam, he must make the choice of what kind of soldier he will be. Will he emulate Sargent Barnes, a …

No posts have been made on this movie yet. Be the first to start talking about Platoon!