Planet of the Apes Movie Information 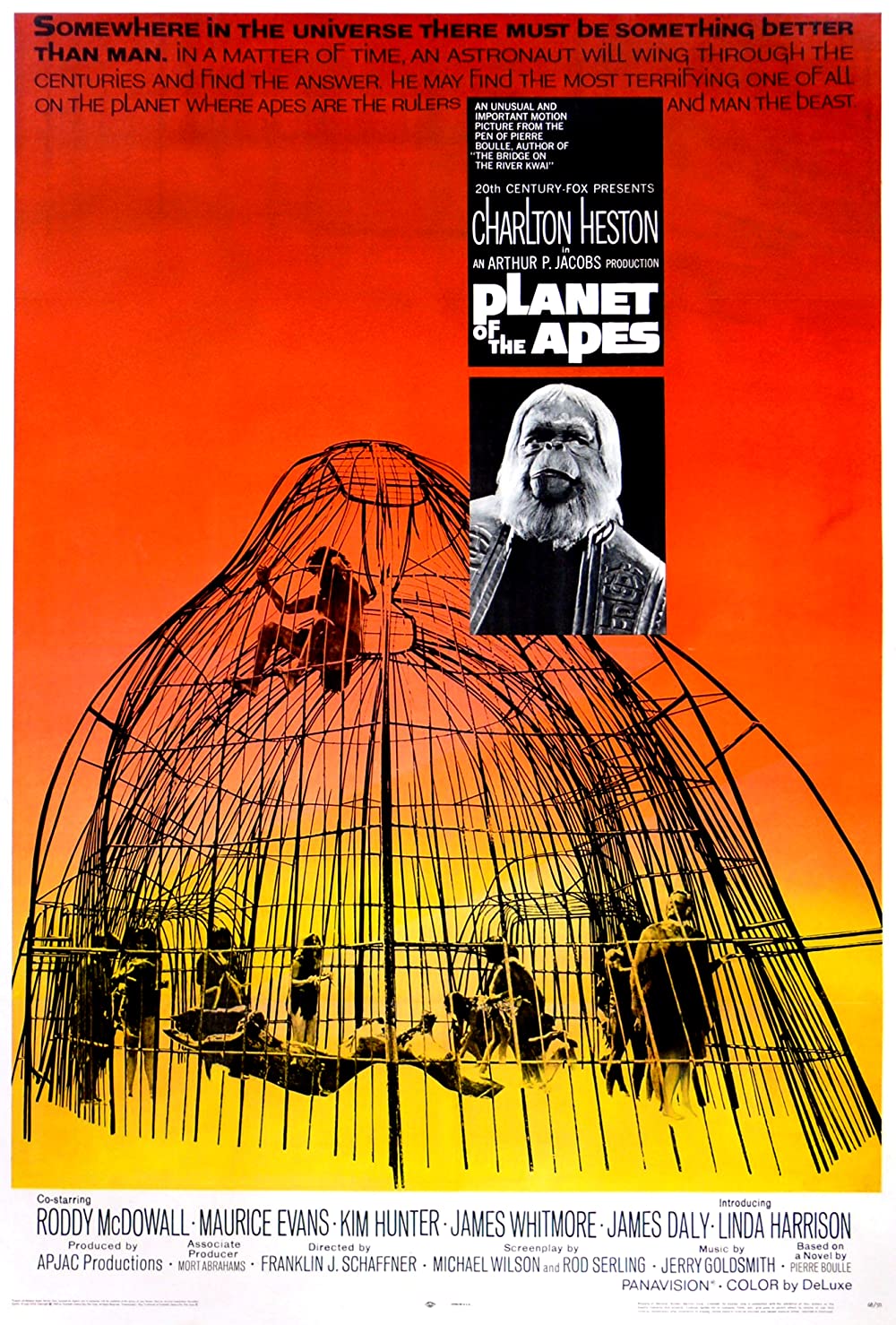 Plot: A group of astronauts are enslaved by a civilization of talking apes in the near future.

As much a socio-political allegory as it is a sci-fi adventure, "Planet of the Apes" is one of those smart 60's B-movies that's still relevant today.

"They blew it up! God, damn you! Damn you all to hell!!! "Take your stinking paws off me you damn dirty ape"!

A classic. Brilliant, even if it is uneventful at times. Its themes are timeless and its message universal.

Take your stinking paws off me you damn dirty ape!

So many things to write about. some of the themes reminded me of things that we're going through right now. Religion was a huge topic. Did "their" God put the monkey on the planet or did they evolve from humans? Eventually that question is answered (the humans were there first). Other issues in American History were alluded to, such as the Standing Bear trials (habeus corpis), which in the 1800s asked the question, "is and indian a man?" In the film, the question that is asked is: "is a human a monkey?" I also saw similarities to the white man coming to America and taking everything away from the Indians. And of course the big issue ends up being the Cold War and nuclear annihilation. A huge nuclear war wiped out the human race and eventually the apes took over.

"Planet Of The Apes" by Yojimbo

A team of astronauts crash land on a planet that is ruled by a race of highly evolved simians who treat the mute, primitive human population like animals. On the surface, Planet Of the Apes looks like just another sci-fi monster movie but the real strength of the film is in its wonderful script. Beneath the (still rather good) ape make up and polystyrene sets is a cunning social satire that tackles subjects as wide ranging as science versus religious dogma, the teaching of evolution, the treatment of animals by the human race and its propensity for the abuse of the environment, all wrapped up in some nice cold war paranoia. Charlton Heston puts in one of his most dominating performances as the misanthropic, cynical man lost in this topsy turvy madhouse and despite being masked by their …

View with subtitles and focus for better appreciation. The ship of Taylor (Charlton Heston), Landon (Robert Gunner), Dodge (Jeff Burton) and Stewart (Dianne Stanley) crashes on an unknown planet 3978 A.D. Only one survives and is taken to Ape City. Dr. Zira (Kim Hunter) observes Taylor and introduces him to her fiance Cornelius (Roddy McDowall). Numerous humans are caged with leashes treated like animals. Dr. Zaius (Maurice Evans) has a secret that was never divulged until Taylorâs arrival. Taylor will likewise discover something shocking upon his journey along shoreline. Charlton Heston and Maurice Evans were fabulous in their roles.

The cinematography and makeup is one of the best this reviewer has seen, just mesmerizing. Soundtrack was apt and screenplay just …

No posts have been made on this movie yet. Be the first to start talking about Planet of the Apes!