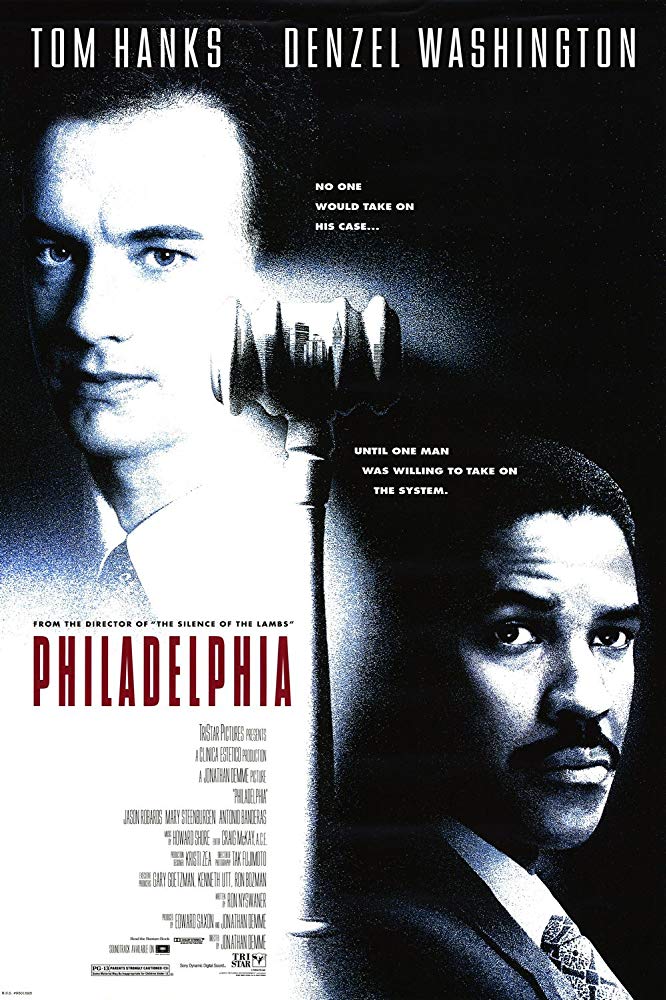 Plot: A man with AIDS seeks a lawyer to help him sue his old employer (who happens to be a lawyer) when he knows they fired him just because he has aids.

Both a great court procedural and unflinching human drama. The social issues become infused with the case at hand, giving strong passionate investment from all sides. Empathy, anger, and sorrow are brought to the boiling point. Justice becomes an emotionally embedded necessity. Great direction, anchored by two excellent performances. This is essential viewing.

This is a poignant and interesting portrayal of a case that raises many legal and ethical questions. Tom Hanks gives a human and genuine portrayal of a man suffering from AIDS that reminds why he is one of the greatest working actors. His portrayal is partnered with Washington's more stern and hands-off lawyer in a pairing that makes for some powerful contrasting scenes.

An original and poignant exploration into a plaguing moral issue: homosexuality in America. This movie has little to do with AIDS, really, but only as a plot device to decode a moral and ethical dilemma. Tom Hanks is superb (as he always is...he's like the male equivalent to Meryl Streep), and Denzel Washington shines in a great supporting role. The two actors intwine beautifully to create a scope of ethical integrity that has nothing to do with the ridiculous dogma surrounding its theme.

Iâve forgotten how fantastic this film is!

1993 and a deadly virus called Acquired Immunodeficiency Syndrome (aka AIDS) was emerging as the most fearful disease on the planet. It had surfaced in the mid 80's but the early 90's saw its establishment as a terrifying and ultimately fatal disease. In this movie, Tom Hanks portrays Andrew Beckett, a successful lawyer at a major law firm on his way to being partner. When he contracts AIDS he hides his illness and continues work. When an important document goes missing and an important client only narrowly avoids ruin, the partners fire Beckett. He however, suspects that his bosses find out that their "golden boy was gay and had AIDS." Beckett then seeks representation from injures lawyer Joe Miller (Denzel Washington), who is homophobic and at first rejects him but then he decides …

Wants to tug the heart strings quite hard.

A film that tries everything to hit the heart strings and is manipulative in every single way possible, with flash backs, scenes of overly evil characters, and over sentimentality over and over again. It could be even more over the head with things but it is still pretty hard over the head in what it is telling. I thought all the characters could have used more development except maybe Denzel Washington's and the court scenes go on auto pilot very quickly. There also are many shots that focus on faces that are more annoying looking than genius a lot of things could have been better done such as Hanks' character needed more scenes actually and needed more to him. A film can try to be like this but It actually needs to be more natural and it should not try as hard.

No posts have been made on this movie yet. Be the first to start talking about Philadelphia!