Out of Africa Movie Information 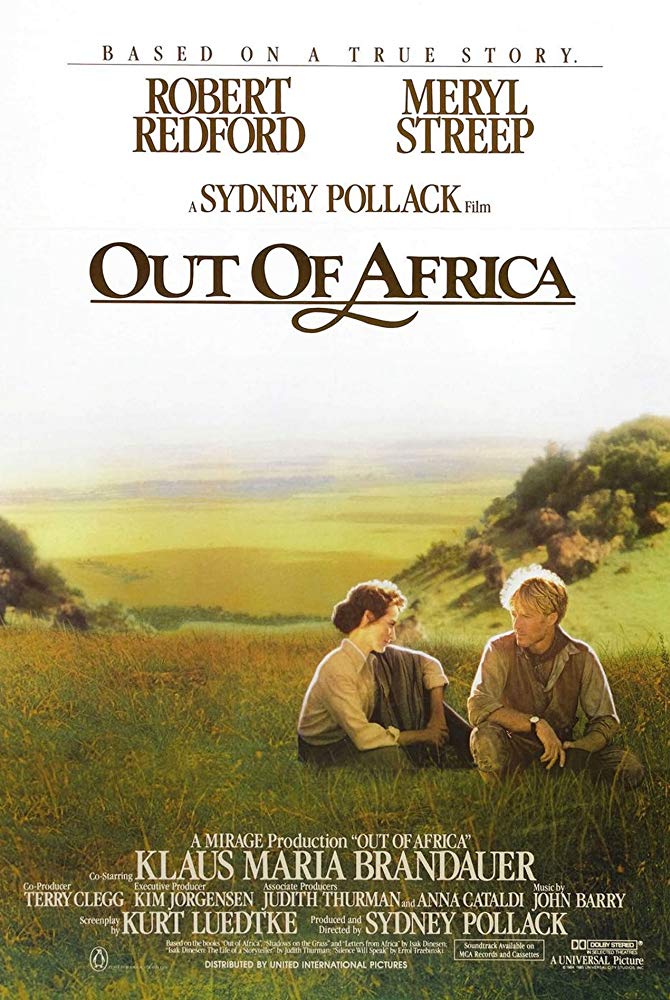 Plot: A big game hunter lures a Danish Plantation Owner in Kenya into his passions for game and hunt while pulling her away from her husband.

It's so boring, unnecessarily long, and the fact that it won Best Picture over such classics as "The Color Purple," as well as "Brazil," "Back to the Future," and "The Breakfast Club" (to name just a few that weren't even nominated) only adds insult to injury.

An overly long but well done epic film starring Meryl Streep and Robert Redford in a typical if tastefully told 'opposites attract' romance. The colonial setting is certainly eye catching with the beautiful African savannas and the period accurate production design. Sydney Pollack's direction is self assured if too leisurely; a half hour could easily been cut from the running time and nothing of importance lost. Part travelogue part memoir and part romance, 'OUT OF AFRICA' is a solid period epic in the vein of a John Huston movie.

Although this film is pretty bloated at times, it does display some incredible chemistry and acting in the onscreen pairing of Streep and Redford. The expansive beauty of Africa is also portrayed wonderfully through impressive shots and directing.

Out of Africa review

"This is the way it was intended." Karen Dinesen (Meryl Streep) asks a friend to marry Baron Bror Blixen (Klaus Maria Brandauer). Cole and Denys Finch Hatton (Robert Redford) become friends with Karen. Karen's husband is sick and always leaves while Denys becomes close to her. Screenplay was good with one of the memorable lines: "We're not owners, we're just passing thru." from Denys. Score, cinematography, and performances were spotless. Settings and photography were as gorgeous as Lawrence of Arabia, Thin Red Line, Wrath of God Aguirre, and Crouching Tiger Hidden Dragon. Only knack would be the length, pace and a few editing and obvious blue-screen treatment. Out of Africa is still one of the best true to life stories displayed on film and its accolades were well deserved …

This film deserves its reputation for being one of the most sweeping romantic films of the 20th century. Directed by the great Sydney Pollack, this picture is grand in scope, not just when it comes to its cinematography, but also when it comes to complexity of its characters and emotions. Meryl Streep and Robert Redford lead the pack and they are nothing short of astonishing; from the moment they met until the end of the film, I thought they had chemistry and the scenes seem to pop whenever they would interact. Iâve always thought that Streep is one of the most elegant actresses to watch but she always surprises me, especially when Iâd watch her older films. She has a way of making the audience like her character one minute but despise her the next. Her character here is a walking …

Karen Blixen (Meryl Streep) wanted to help the people of Kenya, as well as be with Denys Finch Hatton (Robert Redford). She slowly fails at everything in her life in the Best Picture winning "Out of Africa."

Yet another boring, overly-long Best Picture winner. I can take long length, I can take drama, but I can't take lack of something to care about. The characters here have nothing going for them and are in no way original. Yes, I know it was based on a true story, but no, it's not an interesting one. The whole Kenya thing seems to be a red herring for the poorly delivered love story.

The acting is just as uninteresting. Streep and Redford show little true passion between each other, so it's really hard to believe their story. I'm not saying that it was bad acting, I just can't …

No posts have been made on this movie yet. Be the first to start talking about Out of Africa!