Once Upon a Time in America Movie Information 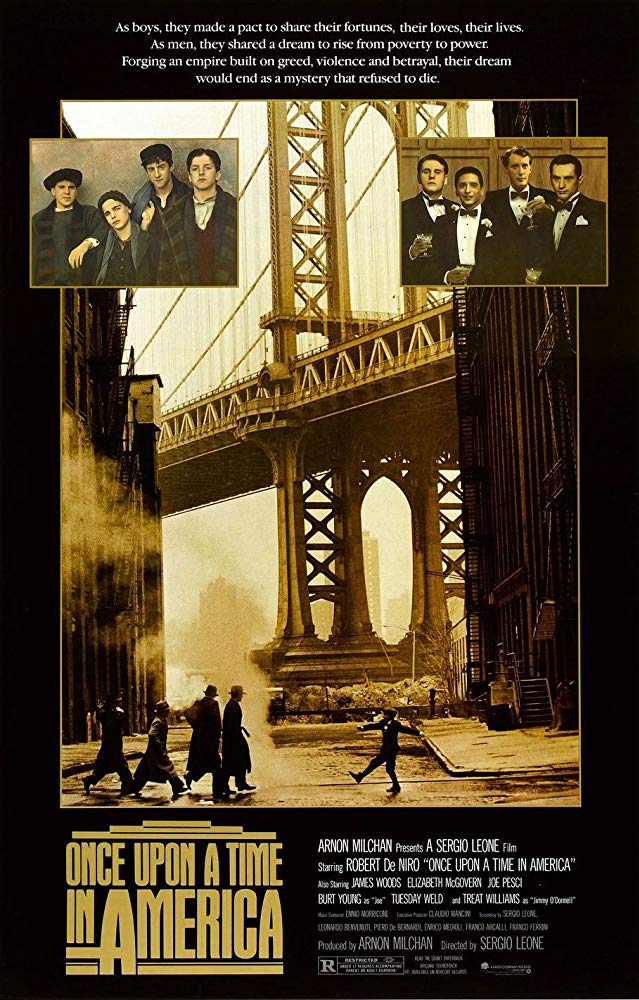 Plot: Noodles, a Jewish gangster, returns to his stomping grounds where he tries to forget the past and the tragic events that occurred.

To the 80s what "The Godfather" was to the 70s and "Goodfellas" to the 90s, Sergio Leone's 4-hour director's cut of this Jewish gangster epic towers over other crime dramas with its grandeur scope and aesthetic significance.

One of Sergio Leone's forays outside of the world of Westerns results in a haunting and sprawling portrait of innocence lost, set in the world of early 1900's gangland. The film is engaging throughout, despite being nearly four hours long, anchored by another great performance from Robert De Niro.

Operatic and rich in period detail, Sergio Leone's farewell to the world of cinema could not possibly have been more grand and poignant.

"Once Upon A Time In America" by Yojimbo

Sergio Leone's epic tale of the life of a group of slum kids turned gangsters is certainly not for those looking for a cinematic quick fix; it weighs in at over 3 and a half hours. But I must say it did not drag, although I think it could have been a much better film with some serious trimming. The meat of the story, set in the years when the friends had become established gangsters were excellent, but it dwelt on their childhood escapades for far too long and the scenes set in the modern day were overly soapy and melodramatic. My other problem is in it's depiction of women. Without exception, every female character was either a hooker or a rape victim or both. It's certainly worthwhile, especially for the central section, but as a depiction of a criminal dynasty, The Godfather reigns …

No posts have been made on this movie yet. Be the first to start talking about Once Upon a Time in America!