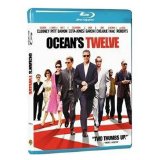 Plot: Clooney (Ocean) needs another crew member to pull of the biggest heist in european history - the gang is back!

Just as implausible and complex as the first heist film, but way too convoluted to be as fun.

Not nearly as much fun as the first, despite the charisma of the cast. A messy re-telling of the caper in this film is distracting. Awesome Bruce Willis cameo, however.

The entire cast returns for another slick and fun outing, but it just doesn't match up to the first.

Doesn't Even Compare With The Original

Though Ocean's Twelve is extremely confusing, the basic plot can be summed up in one short sentence: The Ocean's Eleven crew has to somehow get 97 million dollars, and give it to Terry Benedict, the antagonist of the original and this horrendous sequel.

Gone is almost everything that made Ocean's Eleven such an entertaining film. Ocean's Eleven primary strength were the characters. And while the entire cast is back for the …

I think that this is a love or hate kind of film. So I'm not going to fly in the face of popular opinion, and tell you I loved the first half, and hated the second! Clooney and Pitt have actually managed to form a buddy partnership to almost emulate that of Redford and Newman, and during the stylish and witty first hour, it sparkles. Unfortunately, half way through they are arrested and are never on the screen together again...instead we are presented with Julia Roberts playing Tess playing Julia Roberts, alongside Bruce Willis playing himself purely for the sake of it. Add to this the fact that the clever heist-based plot is replaced by The Pink Panther does Entrapment and it completely flounders. Which is a real shame because up until that point, I was really enjoying it...

No posts have been made on this movie yet. Be the first to start talking about Ocean's Twelve!