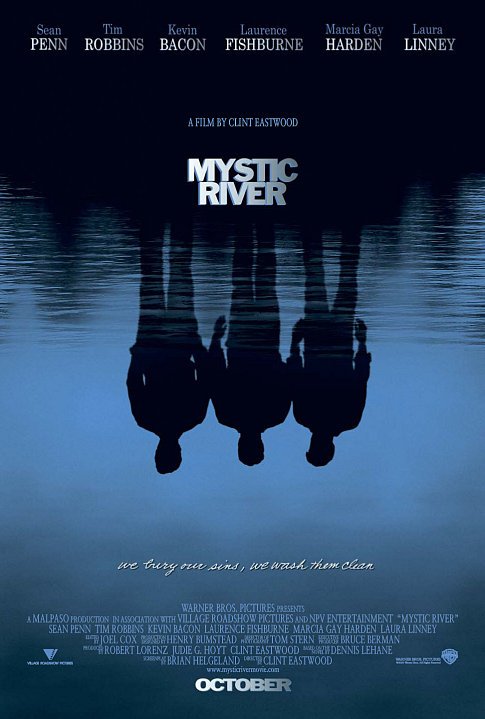 Plot: As childhood friends drift apart, they are reunited when one of their daughters is killed and one of them could be a suspect based on his past.

Unrelenting and excellently acted, "Mystic River" is a gripping story of three childhood friends confronted by their past.

Never comes off as deep as it wants to. The basic plot is decent, but never too involving. It's all been seen in the exact same way before. The ending brings the only new elements. Predictable, in an acceptable manner. Well done in most other areas. Worth a watch.

Although the book was better, the movie did somewhat of a good job putting the best of the book in it. It is still an all around good movie, and i would suggest it

Three childhood friends who share the memory of a traumatic event are brought together once more when one of their children is murdered. Clint Eastwood once again proves he is one of the best directors working in Hollywood with this extremely well acted and written crime drama. The characters on display are far more sophisticated than those found in your average mainstream thriller, and the top notch cast all get to demonstrate their thespian chops with plenty of meaty dialogue as Clint cranks up the suspense with consummate skill. I personally have always found Penn a little unconvincing and his performance here is a little over-ripe as well, but he is a suitably intense protagonist. Kevin Bacon and Laurence Fishburne are totally believable as the detectives on the case, very much in …

Jimmy (Penn) is an ex-con running a neighborhood store, while Dave (Robbins) is a blue-collar worker meet after 25 years. Sean (Bacon), who is now a detective with the Massachusetts State Police, discovers Katie's corpse. Sergeant Whitey Powers (Laurence Fishburne) and Sean investigates the murder case. The day Katie was murdered, Celeste (Marcia Gay Harden) sees her husband with a bloody stomach and hand. Katie suspects Dave of killing Jimmyâs daughter and informs Sean about her suspicion. Brendan and Ray Jr. confront each other while John is caught in the middle. Those responsible of Katieâs death confessed in the end while another was unfortunately blamed. Highlights of the film would be Jimmy finding out his daughters body, his talk outside the house with Dave, and when …

Clint's masterpiece in at #28!

Mystic River is Clint Eastwood's crowning achievement as a director and is a breathtaking and powerful film adaption of the equally powerful novel by Dennis Lehane that examines lost youth and other kinds of loss that sweep their way through a small Massachusetts town where everyone knows everyone. This story opens on a quiet day in Mystic River when three young boys, Jimmy, Dave, and Sean are approached by a pedophile, they force Dave into their car and he is sexually abused for several days before escaping. The story then finds these childhood friends as adults still living in the same town, though their lives have drifted away from each other somewhat. Jimmy (Sean Penn)is now a small business owner content in his 2nd marriage (Laura Linney)and raising three daughters. Dave (Tim …

No posts have been made on this movie yet. Be the first to start talking about Mystic River!