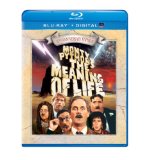 Plot: Monty Python explores the life cycle in a variety of places and times.

The Meaning of Life is without a doubt the most tasteless of the Monty Python feature films; it also happens to be one of the funniest. Life's questions are "answered" in a series of outrageous vignettes, beginning with a pre-credits sequence at a staid London insurance company which transforms before our eyes into a pirate ship. The first part of this movie i said to myself WTF is this, but as the movie went on I begin to laugh and laugh more louder. the movie has some jaw to the floor visuals and the comedy actually made me laugh.

Funny point of view about the meaning of the life in surreal comedy.

This is the most reminicent of the show.

This is truly the only Python film that captures the essence of the original television series. Michael, John, Terry, Terry, Graham, and Eric put together a film that is not only a collection of sketches loosely bound together by the topic of Life (and, eventually, Death), but an intense social commentary as well. The Meaning of Life is not just about comedy; it's about shock value and making light of human experience. It's a film that allows us to laugh at ourselves and each other as we progress through life, from birth to death and all the stages in between. Touching on topics such as capitalism, sex, military, death, obesity, the vastness of the universe, fish, government, and bureaucracy, The Meaning of Life is educational, deep, and even funny at times. You'll be surprised how far …

No posts have been made on this movie yet. Be the first to start talking about Monty Python's The Meaning of Life!