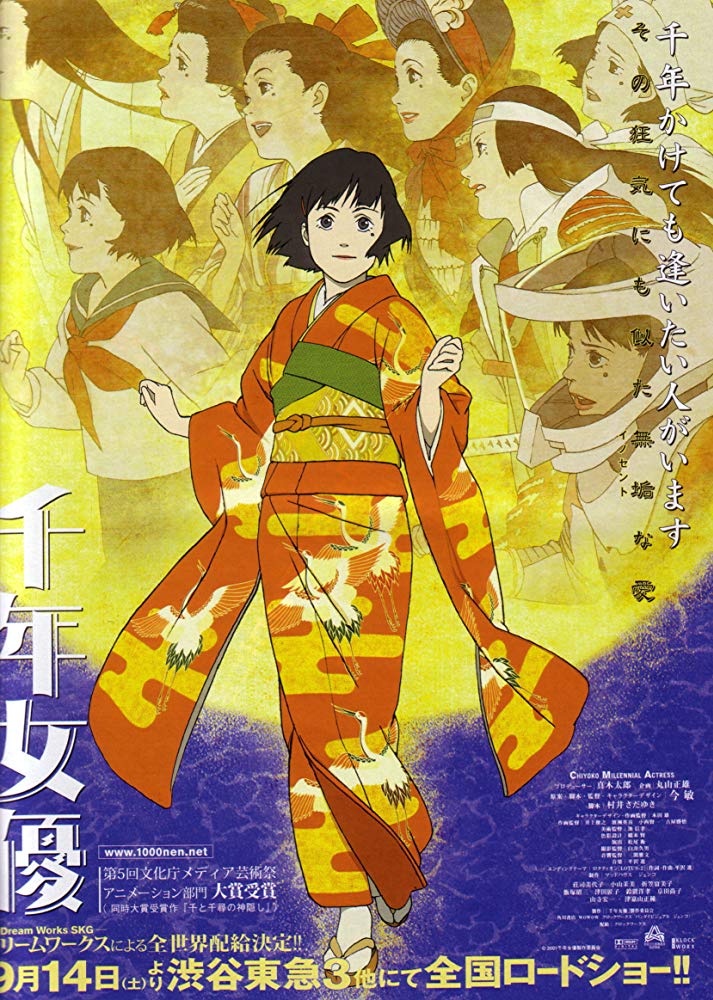 Plot: After 30 years, a reclusive, aged actress grants an interview with a journalist as the studio she worked for is torn down. Her tales of cinema are interweaved with the story of finding a young artist she met as a young girl.

A trippy film that uses a juxtaposition of cinematic and storytelling imagery to portray a simple tale of love and longing. The layered symbolism and intersecting narratives in the film make it a rich film to dissect and discuss.

Action: 2 / 3, Comedy: 1 / 2, Good vs Evil: 0 / 1, Love/Sex: 1 / 1, Special Effects: 1 / 1, Plot: 1 /1, Music: 1 / 1. Thus, 7/10 or 70%. The love of cinema is the running theme throughout the main character's views of love and infatuation. Past movies dictate the memories and actions of the actress and her journalist. The cameraman operates as some genuine comedy relief- he can't figure out what he's seeing through the camera and every time he films he wonders why the parts keep changing. Truly a genuine and emotional addition to animated cinema to seek out and enjoy!

This movie proves that anime doesn't necessarily mean amazing action sequences. Anime can also be used to tell a story about love, longing, and an epic human journey. I highly recommend this movie, especially to aspiring American filmmakers, because the director chose an interesting medium to tell a very human story. This is my first film from Satoshi Kon. I'll be watching his other films soon.

No posts have been made on this movie yet. Be the first to start talking about Millenium Actress ( Sennen joyÃ» )!