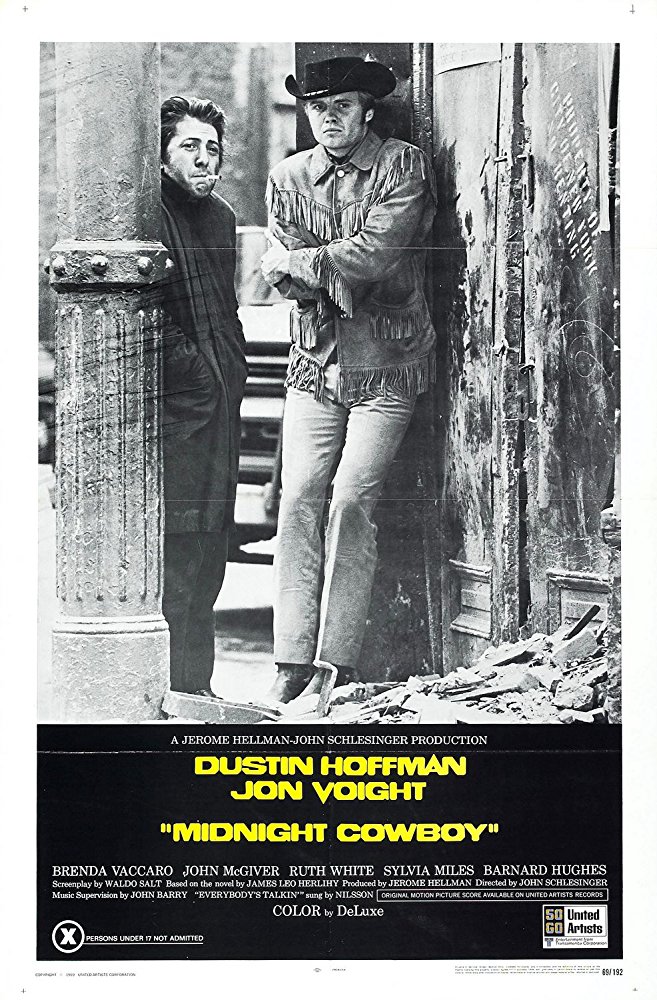 Plot: A lonely male prostitute finds an unwanted friend who both try to survive life on the streets in urban New York City.

The first X-rated movie to win Best Picture, "Midnight Cowboy" delivers just what you would expect (as far as the late-60s are concerned.)

John Schlesinger creates the perfect, almost flawless counterpart of Hopper's Easy Rider (1969), promoting cinema's iconoclasm and creating a financially successful, haunting and utterly unique masterpiece. The sexual revolution collides with the hippies' era and the Voight-Hoffman duo collides in a breathtaking cataclysm of unfulfilled dreams and a realm where fantasy, hallucinations and reality mend together. Stereotypes are smashed and banal attitudes are raped and destroyed, intellectually speaking. 97/100

I'm going to keep this short and sweet...I hope. I did not really care for this film. Quite frankly I don't know why it won Best Picture at the Oscars and I don't know why it's considered as great as it is. The acting is great, especially Hoffman. I'm not a huge Jon Voight fan, but he was good. Maybe if I lived in New York, I would "get it." Maybe if I was alive in '69 or had read the book, I would "get it." But since neither of those things have happened, I don't get it! Was this a thing? Did people really move to New York to be gigolos? And, this was pre-AIDS, but Ratso sure acted like he was dying of it. I just don't get it, my rating would've been lower had the acting not been top-notch.

Joe Buck (Jon Voight) goes to New York to be a hustler. He meets a cripple named Enrico "Ratso" Rizzo (Dustin Hoffman). Soundtrack was apt and endearing, which captivates attention to every poignant scene. Performances of the leads keeps you engaged, Voight with his innocent looking childlike eyes and Hoffman's scheming gestures coupled with an authentic looking limp and sickness. Screenplay was provocative with lines "A person's got to make a living." - Cass. "Well, we all have our off days." Towny. A film that tackles on survival, ambition, friendship, homosexuality, loneliness, bad past, transformation, and death. Midnight Cowboy is a dark, often funny, dramatic picture that touches on several sensitive issues, especially during it's time.

This movie transcends time, for it is truly one of the greatest movies of friendship and survival to every be captured. It is not just not just the story of the two lonesome characters that have become the pariahs in the land of the American Dream, but is the story of New York City itself; an unforgiven antagist swallowing a million dreams at a time. The film introduced audiences to elements of New York City that before had not been truly captured. This evident in its initial X-rating (later given an r-rating) after it had one the Oscar in 1969), where the themes of male prostitution, sexual exploitation, rape and drugs were still difficult for many moviegoers to comprehend. This movie paved the way for many of its successors: My Own Private Idaho, Taxi Driver, American Gigolo, …

A film with very dark material but the friendship between the two main characters really brightens it up as does Jon Voight's performance as Joe Buck. It is just a film that is intriguing despite its very dark content. The characters are very good because you want to know what will happen to them. There really is no story besides going in to New York and needing to get out. That is all it needs because it holds your interest through its unique visual style.

Oscar Nominee Best Actor Jon Voight 6-Jon Voight is perfect as Joe Buck. He does not do a single thing wrong in the film. All of his emotions are shown very realistically, from his anger to hos overall naive and upbeat attitude.

Movies of 1969 by Stoney McStonerson

Favorite Movies That Take Place in New York by The WHB

No posts have been made on this movie yet. Be the first to start talking about Midnight Cowboy!