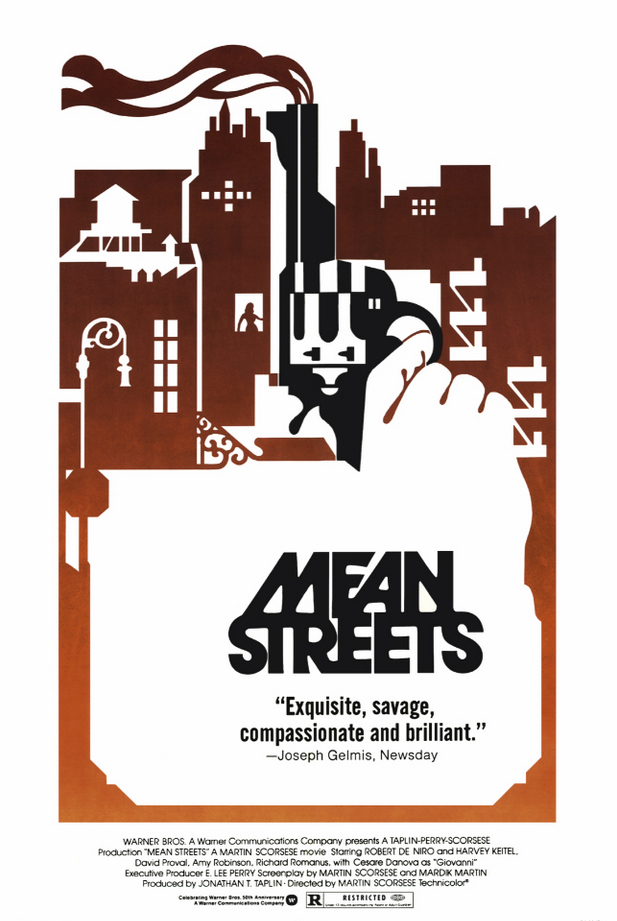 Plot: A young crook uses his anger to survive in NYC stealing and busting jaws.

A fast paced, rough and tough gangster film with all the themes Martin Scorsese would continue to use in his future films.

Not the best Scorsese film for me.

The story that revolves around Charlie (Harvey Keitel) and Johnny Boy (Robert De Niro). Charlie works for his uncle Giovanni (Cesare Danova) and has an affair with Johnny Boy's cousin Teresa (Amy Robinson). A loan shark named Michael (Richard Romanus) searches for Johnny Boy since he is behind with his payments. The plot was thin and some of the scenes were not that interesting. Screenplay was solid with lines: Charlie - "You give your word you gotta keep it." and "Nobody tries anymore...to help people." Themes of police corruption, violence, manners, racism and friendship were in full display. Mean Streets was a good film for its time, though not one of the director's best..

In only his third full-length feature film (non-documentary), Martin Scorsese already is using the tropes that would come to define his work, NYC, the mob, De Niro. It's a film about small-time hustler Charlie (Keitel) who's just on the verge of making it big in the local mob-scene, but is tied-up with the exploits of the no-good Johnny (De Niro, with weird long hair).

The film drags at times, but the ending is quite powerful. Some questions I want answered: Was Charlie in on the whole thing? Did his uncle set them up? Does Johnny die?

Also, the soundtrack is killer, the opening credits with the Ronettes' Be My Baby is classic, I also love the use of early Rolling Stones. Another thing the Scorsese would come back to, the Stones.

It's an interesting film, especially when …

Mean Streets concerns the comings and goings of a group of small time criminals operating in the seedy under belly of New York City. It's an early Scorsese, and you can certainly see him learning his craft as the story unfolds; there are some great scenes and you can see the prototype versions of many from his coming classics. But having said that, a lot of the film is rather aimless and lacking in focus, and many of the minor supporting characters are poorly acted caricatures. It seems more concerned with capturing the characters and essence of this side of New York and often wanders off onto tangents which left me rather restless, and dare I say it, bored? Sacrilege I know, and the ending of the film is very powerful, but the journey there is rather flawed. An interesting film for …

No posts have been made on this movie yet. Be the first to start talking about Mean Streets!