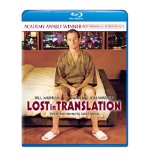 Plot: An actor past his prime and a bored, young wife form an unlikely companionship in Tokyo.

Charming while still being smart and sentimental without being overly sweet.

Best movie of 2003. This film is about an actor past his prime and a bored, young wife form an unlikely companionship in Tokyo. This movie had one of the best writing of 2003, The movie had strong two main characters that made the movie more sweet and sad at the same time. The directing is so good that It should have won a Oscar for directing and that's right am saying that lord of the rings the return of the king should have not won a Oscar for directing this movie should had won. The cinematography is so beautiful to look at that it's hard to take your eyes off the screen for one second.

What an honest and quiet film. My favorite bits were the scenes without dialogue, and there were just enough of those. When you see a Japanese meal, or you see bits of ice melting and clinking in a glass and you know it's supposed to be alcohol but in reality it's only iced tea. That was the entire movie for me.

This movie is so beautifully empty. It's very reminiscent of real life and how we mask our contempts. Often people are happier alone than with their most loved ones. Who hasn't just wanted to get away from an awkward conversation and look out of a window?
I guess you could argue: this movie is about nothing. It's simply a couple of people happening to stay in the same hotel and experiencing the same obtrusive culture shock.

The acting by Bill Murray and Scarlett Johansson is quite unprecedented. Murray still had the wit and charm of his other roles and Johansson gave a breakthrough performance.
Their relationship in the film is what we don't see anymore nowadays. Unstable, unmarked and on no particular path. It's great.

Japan is captured beautifully. No nonsense, no intended …

A near perfect masterpiece

Lost in Translation is one of those films in which just about everything is perfect. The performances from Bill Murray and Scarlett Johansson are simply brilliant and their chemistry is great. The cinematography is magnificent and the eclectic soundtrack works very well. Lost in Translation is a joy to watch from start to finish.

Bob Harris (Bill Murray) is an aging actor who comes to Tokyo to shoot a TV commercial for Suntory Whiskey. Bob is in the midst of a mid-life crisis, as he grows bored with his marriage and ventures down to the hotel bar, where he meets Charlotte (Scarlett Johansson) a recent college graduate married to John (Giovanni Ribisi), a photographer who seems to pay little attention to her, opting for the company of models, as well as airhead actress Kelly …

A rare romantic comedy that not everybody might enjoy, fortuitously this reviewer had a blast which each frame of the picture. Bob Harris (Bill Murray) is an unhappily married movie star. He meets a Yale graduate named Charlotte (Scarlett Johansson) who lacks attention from her husband. Excellent and earnest screenplay with the unsullied lines: âIt gets a whole more complicated when you have kids.â âThe more you know who you are, and what you want, the less you let...things upset you.â âDid you ever wonder what your purpose in life is?â The direction and cinematography brought out the beauty and culture of Japan aside from poking fun at the people. Soundtrack was upbeat and sad at specific applicable scenes. Murray was just brilliant and the themes of being lost in …

No posts have been made on this movie yet. Be the first to start talking about Lost in Translation!