Lord of the Rings: The Two Towers Movie Information 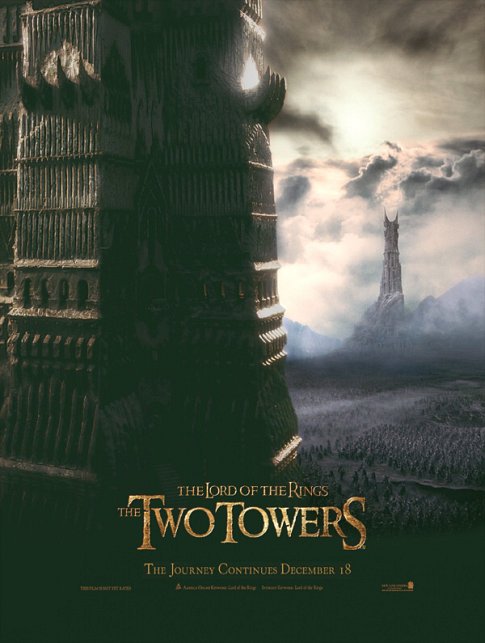 Plot: The fellow has split, but Frodo and Sam have a mission to complete. The others make new friends, while Frodo finds a guide to Mordor.

The middle part is no less epic than the one before or after it.

Okay this movie is called the two towers I mean the title sound's like twin towers. This movie had some good and some Bad, I mean this movie is still epic as hell but the full movie is talking.

As a connecting film, the Two Towers falls into some of the similar traps that most second films in a trilogy do. It is a little long on exposition and a lot of the character relationships simply serve to set up a bridge to the epic third film. Still, as it was shot simultaneously with the other films, it bears some of the same visual eye that masterfully brings Tolkien's world to life. It may be the murkiest of the trilogy, but it has its moments of action and adventure.

The Lord of the Rings trilogy is unique. One may say, "I love the Return of the King and Fellowship, but the Two Towers is my personal favorite." My point is that with most film trilogies, you are gonna easily be able to isolate a favorite film out the three. The Lord of the Rings trilogy is an exception. Peter Jackson dove into this project with an intention to film the whole trilogy in one 15 month shoot, and his intentions exceeded his and everyone's expectations. Sure, a ton of deviation from JRR Tolkien's beloved books was implemented throughout the movies, but the way that it was reflected onto screen was beyond brilliant and greatly complemented the masterful work of Tolkien. Letâs knitpick the second film of the three!

I adore the heck out of this movie, but there are three …

The Greatest Trilogy Of All Time Continues!

After the outstanding "Fellowship Of The Ring", Peter Jackson managed to deliver an equally brilliant film in "The Two Towers." Since this is the middle act of the epic Lord Of The Rings tale, it could have been the weak link, but instead it concludes with the slam, bang thunder of the battle of Helm's Deep. Once again acting is top notch across the board, and all technical credits are state of the art. The scene where Gandalf charges down a hill on horseback in the final battle with horses thundering all around him and Howard Shore's unbelievably fantastic musical score soaring to the heavens is perhaps the greatest movie scene ever put on film. Words can't really describe how great all the Lord Of The Rings movies are, so just watch all three. Once again, make sure to see the …

After the tremendous success of the first Lord of the Rings movie, we are put back into the presence of our favorite characters, and their quest continues... and isn't as interesting as when it started.

The Two Towers is still a very good movie. I love it's depiction of good and evil, the excellent direction and scenery, and of course the awesome concluding battle, but after seeing it again, I did notice many more flaws that partly took me out of the story.

If you really look at it, not much actually happens in this movie. It's pretty bloated with effects and battles, leaving little room for the interesting continuation of the story.
This is quite typical, because often film makers believe that a sequel needs to go bigger. This is not always better.
None of the characters are …

No posts have been made on this movie yet. Be the first to start talking about Lord of the Rings: The Two Towers!