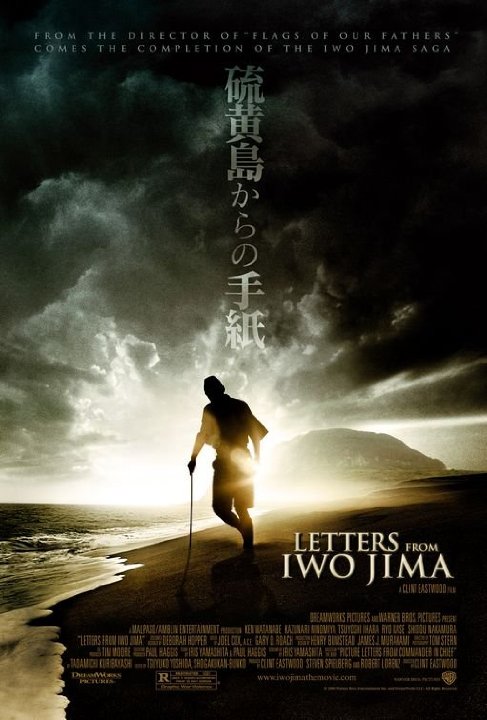 Plot: The battle of Iwo Jima as taught from the Japanese point of view using culture as the difference between Americans and Japanese.

In my opinion, Iwo Jima is the superior of the parallel WWII films of Clint Eastwood, more steeped in character development and less concerned with flashy battle sequences. The themes of honor and virtue that were so important to the Japanese really stick home and it's refreshing to see a war story told from the perspective of another culture.

In 2006, iconic actor and director Clint Eastwood released two movies dealing with the World War 2 Battle of Iwo Jima. Flags of our Fathers dealt with the American marines who raised the American flag in the legendary photograph taken at the time. Letters from Iwo Jima explored the battle from the Japanese perspective and is a far more personal and intimate movie. In examining the hardship and unbearable conditions endured by soldiers facing in surmounting odds, LFIJ humanizes the combatants without being over sentimental. Fresher and more focused than Flags, this is a movie that portrays the horrors of war using superb and assured cinematography and turns an emotionally charged war movie into a near classic.

"Letters From Iwo Jima" by Yojimbo

The story centres on Saigo, a young baker who is conscripted into defending the island of Iwo Jima as the last line of defence against the advancing American forces. The Japanese "forces" are shown as a dishevelled, barely equipped and starving rag tag collection of survivors huddled in underground caves, overwhelmed by the collective might of the US navy and suffering at the hands of fanatical commanding officers who are all too willing to commit "honourable" suicide. In a brave move, Clint Eastwood chooses to show the invasion of Japan from their perspective, and not only that but actually uses Japanese actors speaking in Japanese; the entire film is subtitled which I'm sure went down a treat in Hicksville, USA...This is a very human war story, centering far more on the beautifully …

The compassionate and strategic General Tadamichi Kuribayashi (Ken Watanabe) takes command and inspects the island of Iwo Jima. Saigo, the teenage baker is exposed to the cruelty of war. The screenplay was wonderful with thought provoking lines: From mother of a dead American soldierâs letter named Sam and a Lt. Col. Nishi - âDo what is right because it is right.â ââ¦but I donât want to die for nothing.â Col. Adachi â âIt's inevitable that people will die.â Gen. Kuribayashi â âA day will come when they will weep and pray for your souls. I will always be in front of you.â âIf our children can live safely for one more day, it'll be worth one more day that we defend this island!â

It's nice to see a World War II film from the Japanese's perspective. There are a lot of elements working together here which made this film ferociously effective. Themes of bravery, honor, decisions, betrayals, and truths were consistent with its emotional tone. It's no wonder critics loved this film. I'm not really a big fan of war movies because, like this one, they last really long. Still, I'm not going to deny this movie's boldness and creativity. I did enjoy the battle scenes, which constantly reminded me of "Black Hawk Down." I felt like I was right there in the action. I know I was watching a war movie but I would flinch every time someone died. If one were to analyze this picture, one could see the relevance to the war that is happening in Iraq. The connection is not just the …

No posts have been made on this movie yet. Be the first to start talking about Letters from Iwo Jima!