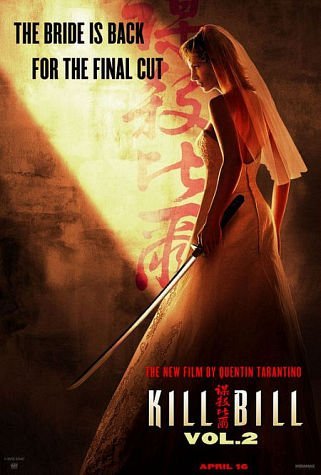 Plot: The bride continues her vengeance against her old "tribe" as she battles her way through them one by one, in which none of them are easy.

While it's a more exposition laden second act, it's just as enjoyable as Vol. 1.

The second Kill Bill film is a perfect companion to the first. It's less action-oriented and fleshes out the themes and philosophy of the first film. When viewed in conjunction with the first film, Volume Two is a brilliant bloodbath of genre homages and themes of revenge and redemption.

Her weapons of choice: whatever is aroundâa lamp, a television antennae, a skillfully crafted samurai sword even her creepy, super long man hands. Her torture endured: painfulâa shotgun blast full of rock salt, years of training, being buried alive. Uma Thurmanâs character (whoâs name is unknown until late in the movie) dishes out as much pain as she suffers in Quinten Tarrantinoâs sequel to last yearâs bloodbath Kill Bill Volume I.

âBillâ II opens by filling in the gaps in Volume Iâs story line. We get to see why Billâs crew massacres Thurman and her friends on her wedding day. In Volume II we are introduced to the Bill (Kung Fuâs David Caradine) and the living members of the DiVAS (Deadly Venom Assassins Squad.)

This movie is deeper, flows better and …

I personally prefer Kill Bill: Volume 2 to the first. That's awkward, because the films were intended as one giant film and were only separated into two because of the lengthâ¦ Well, I guess it's the better half then.

But with that said, it does also come with some faults of the first one.
I find it lingers, it doesn't have the same over-the-top self-awareness of Volume 1. There is a scene with truth serum involved, which I thought was just ridiculous, and I find the fight between The Bride and Elle Driver to go way too far. Even for Tarantino standards, that scene made me cringe.

Otherwise, it has all the goods of the first one and improves them.
The acting - which was great already - is perfected in this one. We finally see David Carradine's face and Uma Thurman shows what she …

A roaring rampage of revenge!

âYouâre not a bad personâ¦youâre a terrific person â¦youâre my favorite person but every once in a while you can be a real c**t!â

The movie begins with a flashback of the wedding rehearsal. 'The Bride' (Uma Thurman), as we learnt from Vol. 1, is on a killing spree after 'Bill' and his assassins killed her soon-to-be husband, family and friends at her wedding rehearsal. In part one she killed off Copperhead (Vivica A. Fox) and Cottontooth (Lucy Liu). Now the time has come for evil and remorseless Elle Driver aka the California Mountain Snake (Daryl Hannah) and Billâs younger brother Budd (Michael Madsen). One question remains, will she be strong enough to kill her former boss and ex lover, Bill?

She starts off with Budd, who apparently traded his 'killer-life' for a …

No posts have been made on this movie yet. Be the first to start talking about Kill Bill: Volume 2!