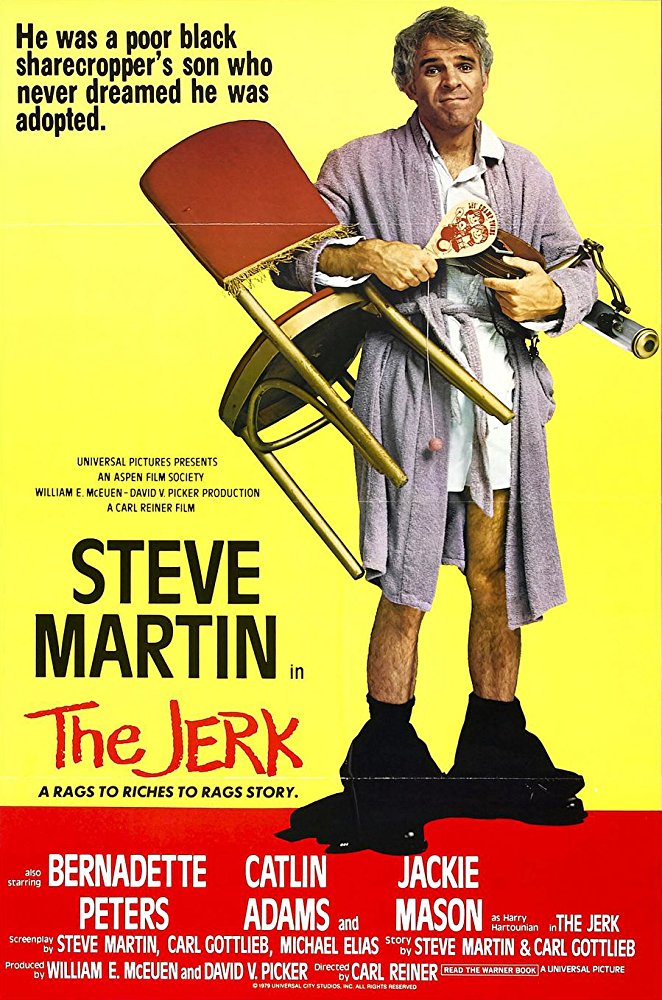 Plot: A rags to riches back to rags story of the clueless, innocent Navin Johnson.

Steve Martin will always be a comedy treasure, but this movie is an unfocused, undisciplined mess that rattles off jokes that almost always land flat.

Steve Martin says "I was born a poor black child'. If you get that, watch this funny, funny, movie. If not, hand the DVD to someone with a sense of humor.

Undeniably silly and completely hilarious. One of Steve Martin's funniest.

One of the known comedies of its era. Martin usually partners with a popular comic, this time he holds his own. Navin (Martin) was raised by blacks and decides to leave his home place to search for meaning after hearing a song on the radio. Simple plot but enjoyable especially the hilarious moments about his special purpose and the house having wine as a dispenser. Soundtrack was applicable with his roots and Martin's performance carries the film. The humor was not as impressive unless it were Dumb and Dumber, it still provided sufficient humor with lessons of surviving outside your comfort zone, integrity, hardworking, luck and family. The Jerk manages to entertain despite some minor flaws, it's definitely a better comedy than recent movies of its genre.

"The Jerk" by Yojimbo

The Jerk is the story of Navin R. Johnson, who was born a poor black kid but on hearing muzak for the first time discovers his rhythm and set out to find his special purpose...Some younger movie-goers may not know this, but Steve Martin actually used to be funny. This is one of his early films, and as such is far more concerned with random silliness and slapstick than the saccharine soaked sentimentality that became his trademark. I loved this film when I was younger but inevitably on revisiting it, it wasn't as funny as I remembered. I think the problem is that the Zucker/Abrams franchise behemoth has long since milked this particular brand of humour dry, so it all looks far more everyday and run-of-the-mill than it used to. But it's still got plenty of laugh out loud moments, including …

No posts have been made on this movie yet. Be the first to start talking about The Jerk!