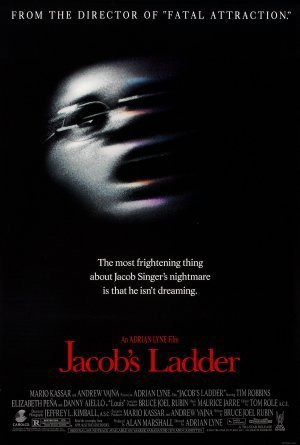 Plot: A New York postal worker, has increasingly harrowing flashbacks to Vietnam as his life unravels before him.

This is a disorienting and claustrophobic look into the effects of PTSD that mostly succeeds. The film is best at creating an atmospheric attitude of terror and confusion that washes over the entire film.

The less I knew what was going on, the more I wanted to find out. This film has a strange effect just like the crazy hallucinations it presents. I liked the camerawork and editing. Truly weird, in a good way.

the best pychological horror out there! try to watch it alone you might go insane!

Jacob Singer (Tim Robbins) experiences peculiar behavior in his platoon during the Vietnam war. He asks assistance Louis (Danny Aiello) for the strange things that he viewed. Pace was somewhat slow and method of storytelling a bit confusing if not paid sufficient attention though the conclusion was apt and spectacular. Performances were superb, score, effects and costume designs were realistic. Special features including the "Making of" featurrette were insightful. Screenplay was well written with the best line from Louis: "The only thing that burns in Hell is the part of you that won't let go of life, your memories, your attachments. They burn them all away. But they're not punishing you, he said. They're freeing your soul. So, if you're frightened of dying and... and you're holding …

A chilling horror in which Jacob, a New York postal worker, recieves hideous demonic visions of bizarre creatures in the city as he starts to lose his mind and get flashbacks of his Vietnam war days, and uncovers a sinister government plot to make sopldiers become killing machines and lose their emotions, in a project called ''Jacob's Ladder''
I heard this film inspired the popular and terrifying Silent Hill videogame series, and I can see the connection. A normal man with a normal life is thrust into a nightmare world of secrets and madness and is revealed to have had a strange past life himself. Whilst Silent Hill was all supernatural, Jacob's Ladder is more mental and more on the level of conspiracy, even if it is rife with monstrous visions …

I donât know whether or not to recommend this picture because Iâm kind of disappointed since I expected a different kind of film. But in a way, original expectations aside, this is a pretty solid and original piece of filmmaking which helped inspire modern psychological-thriller films that generate various valid interpretations due to a controversial ending. Creepy images are aplenty, some of which Iâve seen from the classic âBuffy the Vampire Slayerâ and the horrendous âOne Missed Call.â I thought the writing was strong because it kept me guessing from beginning to end. Just when you think you got it all figured out, a missing piece of the puzzle is provided so then you have to take that into consideration and perhaps change your idea of where the story is really going. …

Top 8 Horror Films of the 1990's by Stoney McStonerson

No posts have been made on this movie yet. Be the first to start talking about Jacob's Ladder!