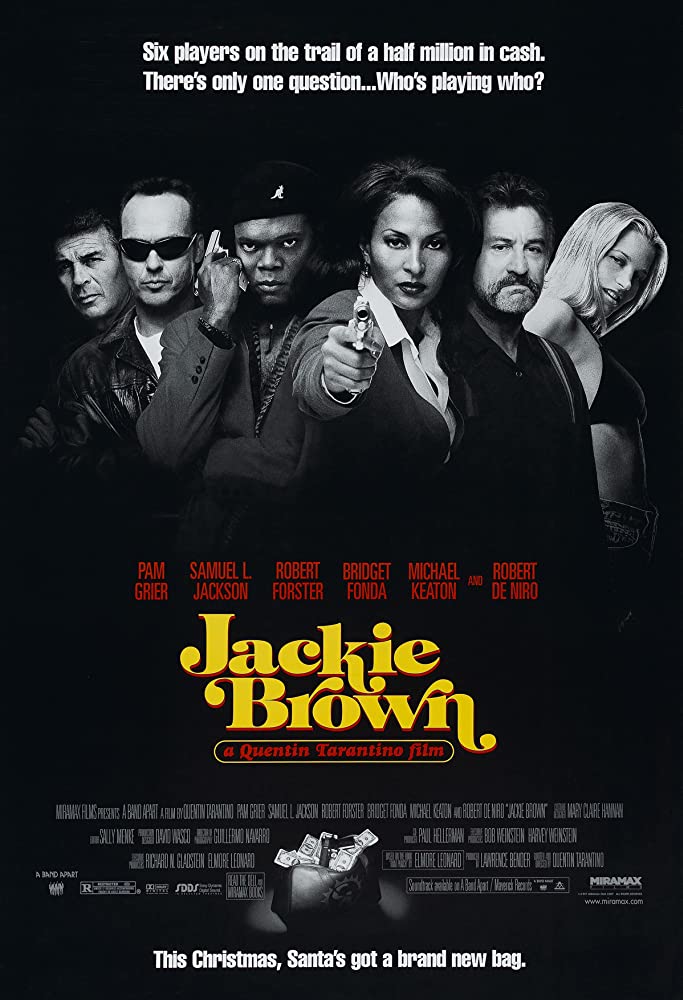 Plot: An arms dealer, a flight attendant, a bale bondsman, and a couple of cops are all after drugs, guns, love, betrayal, and honesty.

Compared with Tarantino's other movies, Jackie Brown is far more traditional in terms of dialogue and storytelling. It's perhaps longer than necessary but it allows for a good cast to flex their muscles. Pam Grier is alluring as the cunning and resourceful flight attendant Jackie Brown who has to maneuver past determined federal agents and a ruthless arms dealer (SLJ).

An arms dealer, a flight attendant, a bale bondsman, and a couple of cops are all after drugs, guns, love, betrayal, and honesty. This is my least favorite movie from Quentin Tarantino, I mean the movie has some really good writing in it but the movie feels so slow.

If you ever ask me what my least favorite Tarantino film is, my answer would have to be Jackie Brown. While still an interesting film, I find it to be the least enjoyable, because it doesn't have the same flair that his other features do.

There are of course good things about Jackie Brown (hence the 3/4 rating). I like the music, direction, dialogue and the always enjoyable pop culture references. It has the same things that make Tarantino known to be Tarantino.
But from the start, I felt that it was missing something. A lot, actually.
It's the first Tarantino movie that I can say after watching: that was boring.
They make out the characters to be extremely smart and everyone has a plan in mind around every corner. While the premise is smart and their intentions are menacing, it …

Ageing flight attendant Pam Grier is caught between the police and ruthless gun runner Samuel L. Jackson and enlists the help of bail bondsman Robert Forster to scam half a million dollars in the process. Jackie Brown was met with a level of disappointment when it was released; yes it had the cool ensemble cast, excellent retro soundtrack and prolific use of the "N" word, but where were the violence, idiosyncratic characters and quirky comic dialogue we were all expecting? But the fact is, Jackie Brown is by far the most mature film Tarantino has made so far. The dialogue is more naturalistic, the characters believable and well written, and the statuesque queen of blaxploitation Pam Grier proves that the years have in no way diminished her charisma and sex appeal. She gives a sensitive, …

No posts have been made on this movie yet. Be the first to start talking about Jackie Brown!