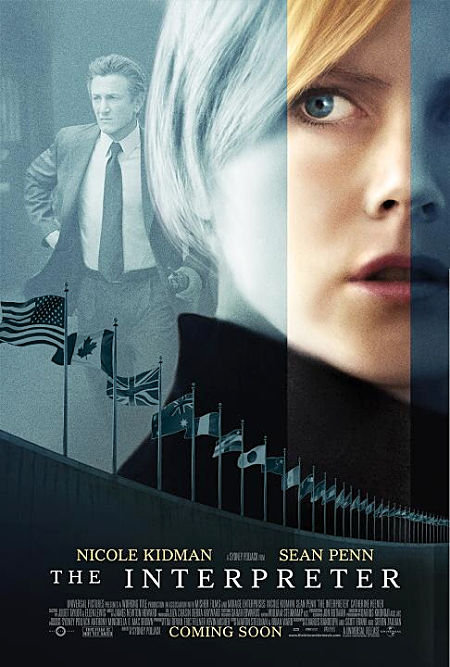 Plot: A female interpreter overhears a conversation about an assassination in a rare African dialect. As the plot unfolds and details on her personal life emerge, she becomes both witness and suspect. -- Chris Kavan

Skillful, efficient thriller which wisely avoids romantic entanglements, but its slow pace will make most viewers restless. Final Grade: B-

Despite the good casting, a great location and an interesting story, it feels like somethings missing. There should be intrigue, but it never gets that exciting. Adequate, but nothing spectacular.

Not bad, but not good enough. The subject is good, so it's the plot. Both actors do their jobs perfectly, and the suspense is well created. But something fails in the script, wich is not surprising sin Pollack is actually not a good filmmaker, so, add to that a bad script and the result will be a very soft movie. Not solid at all.

"The Interpreter" by Yojimbo

An interpreter overhears a plot to assassinate an African dictator and is assigned a burnt out cop (is there any other kind?) to protect her. The Interpreter is exactly what I was expecting. A cast of actors on auto-pilot, going through the motions of political intrigue in a factory-farmed Hollywood thriller that seems to have been regurgitated onto the multiplex conveyor belt by a script-writing machine. Penn and Kidman are suspicious at first, bond, share, have a will-they-won't-they scene, the plot twists on cue, there's an earnest race against time and a dash of dramatic irony at the end. Pure film making by numbers, the end result is a big flavourless, colourless bag of meh that I ended up wishing was a bit worse than it was. At least then it would've been more interesting.

Silvia Broome (Nicole Kidman) is an interpreter involved in a death threat of a foreign leader. Tobin Keller (Sean Penn) and Dot Woods (Catherine Keener) are from the secret service who investigates the interpreter and safeguard Edmond Zuwanie (Earl Cameron), president of Matobo. Somebody approaches the place of Silvia on a mask gesturing a âbe quietâ sound. Despite the upbeat soundtrack, the pace of the picture was a bit slow because of the romantic angle between Silvia and Keller. The movie had some good lines such as: Silvia â âVengeance is a lazy form of grief.â Keller â âYou never had time for a lot of things.â Alternate ending wasnât that thrilling as well. The Interpreter serves a good message if only it were more interesting.

United Nations South African interpreter "Silvia Broone," who inteprets in the UN General Assembly for the (fictional) South African country, "Motobo," who overhears a conversation while getting her things she had to leave behind when the building was evacuated earlier in the day. The conversation just happens to be in in the "Motobo" dialect.

No posts have been made on this movie yet. Be the first to start talking about The Interpreter!