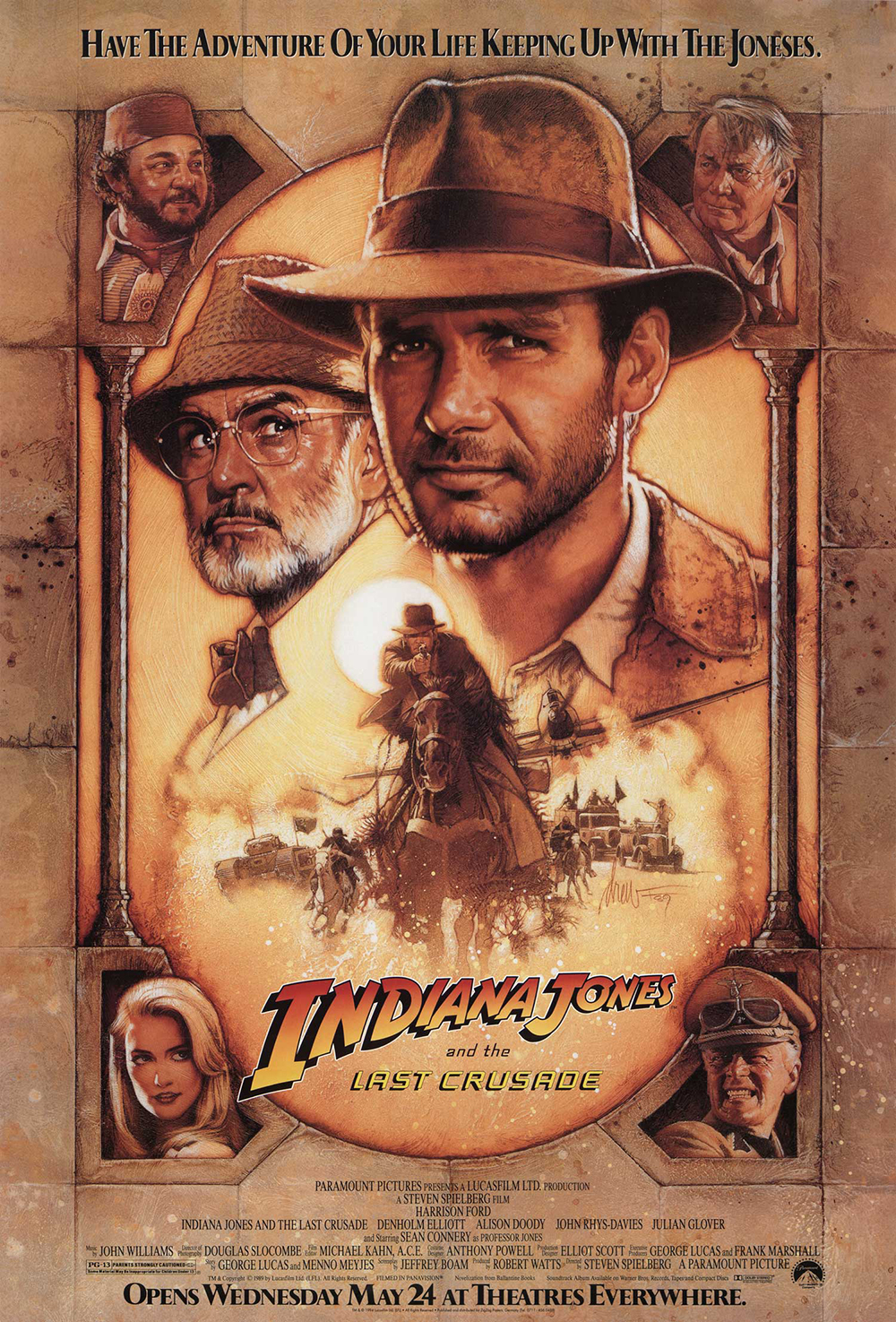 Plot: While Indiana's father is off searching for the grail and goes missing, he is called upon to rescue him before the Nazis find the Holy Grail.

It fills you in on Indiana's past which is appreciated, and as a result, improves on "Temple of Doom."

While Indiana's father is off searching for the grail and goes missing, he is called upon to rescue him before the Nazis find the Holy Grail. Harrison Ford and Sean Connery worked really good in this movie and that's what made this movie good.

Raiders' iconography aside, this is my favorite Indy film. It features a more light-hearted take on the 1920's serial caper and features some of the film's best blends of comedy and action. The brilliant pairing of Ford and Sean Connery as father and son breathes new energy into the series. Along the way, of course, the film features a continuation of the series's big action setpieces, as Indy travels to Europe and the Middle East and remains exciting, while reversing the darker and more morose effects of Temple of Doom.

They don't make adventure movies like this anymore. The movie begins with an unforgettable chase through a circus train with a Young Indy which even explains the origins of his chin scar, his fear of snakes, and his whip and hat. (The late River Phoenix really captures the mannerisms and facial expressions of Harrison Ford in this sequence)

Dr. Jones (Indy or Junior) is on a crusade to find the Holy Grail or the Chalice of Christ and complete his father's life research and keep it from getting into the hands of the Nazis. Indy's father, Professor Henry Jones is beautifully played by Sean Connery. Mr. Connery brings that fatherly image perfectly to the screen. Dr. Jones Sr. is always obsessed with his work which is seen through Indiana's constant longing for a "real" dad or father …

"Indiana Jones And The Last Crusade" by Yojimbo

The third installment of the Indiana Jones story sees Dr. Jones in search of his father who disappeared while searching for the Holy Grail. Spielberg obviously learned from his mistakes of the previous film, and recaptures the spirit of the original. The film opens with a fun comic strip origin story featuring River Phoenix and once again religious myth, which is so ingrained in the popular consciousness it rarely fails to engage the necessary sense of wonder, forms the premise of the story. He replaces the irritating sidekicks with affable buffoons Marcus Brody and Sallah who return from the first film and Alison Doody spends her 15 minutes of fame as a kind of glamorous 30s Bond girl. But most importantly of all we get to meet Henry Jones Sr. Sean Connery was an inspired casting choice …

Masterfully Done in Every Way

This installment of the "Indiana Jones" franchise is crucial because it contains most of the series' heart. The audiences get to know more about Indiana Jones by seeing how he was like when he was a teenager, briefly but brilliantly played by the forever talented River Phoenix. Not only that, Indiana's father is introduced, hilariously and wisely played by the great Sean Connery. Despite the amusing bickering between the two Dr. Jones, there are moments in the film--may they be a specific glance, a sensitive camera angle, or an expert delivery of silence--when the viewers get to truly feel the strained relationship between father and son. It is often touching, if not relatable. The plot is more similar to "Indiana Jones and the Raiders of the Lost Ark" because the characters jump from …

No posts have been made on this movie yet. Be the first to start talking about Indiana Jones and the Last Crusade!