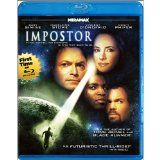 Plot: The movie takes place in a futuristic world. Gary Sinise is being questioned by authorities on if he is a sinister cyborg there to spy and threaten the safety of the people or if he is the original man he used to be. His wife stands firmly by his side as he is running for his life to prove that he is innocent and he is the man that he says he is. -- Mongoose

Weapons designer Gary Sinise finds himself on the run in a warring future state after being accused of being an alien spy. Yet another potboiler based on a Philip K. Dick short story, Impostor doesn't really have the depth or invention to satisfyingly explore the source material's themes of identity and sense of self. It does however have some nice effects and production design, and a cast that although lacking in big name stars, does have enough in the way of solid character actors to keep you watching, including Vincent D'Onofrio, Tony Shalhoub and Madeleine Stowe. The rather straight to DVD style direction and unimaginative plot (it's basically just a long chase sequence) means it will win no prizes for originality, but taken as a no frills sci-fi B-movie it has enough action and …

Movies of 2002 by Stoney McStonerson

No posts have been made on this movie yet. Be the first to start talking about Impostor!