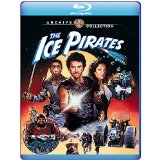 Plot: In the future water is the most valuable thing in all the galaxies. A group of thieves travel from planet to planet stealing ice to sell on the black market.

Slapdash pastiche of pirate movies, science fiction, and post-apocalyptic flicks. Think Star Wars meets Mad Max meets I guess Errol Flynn movies. That sounds amusing but the movie is mostly dull and slow moving. And for some reason Anjelica Huston is in this movie. The first joke is a fart joke and that sets up what you're in for. Rest of the humor is random as they are strange whether it be a castration factory or space herpes. I will admit I kind of like the set design and some of the costumes. It deserves a funnier movie.

Goofy film that marries sci-fi with swashbuckling adventure. An average B movie.

This is a classic! From space herpes and disfunctional robots to time warps. I highly recommend this one. I would have to say it ranks up there with Adventures of Buckaroo Banzai.

No posts have been made on this movie yet. Be the first to start talking about The Ice Pirates!