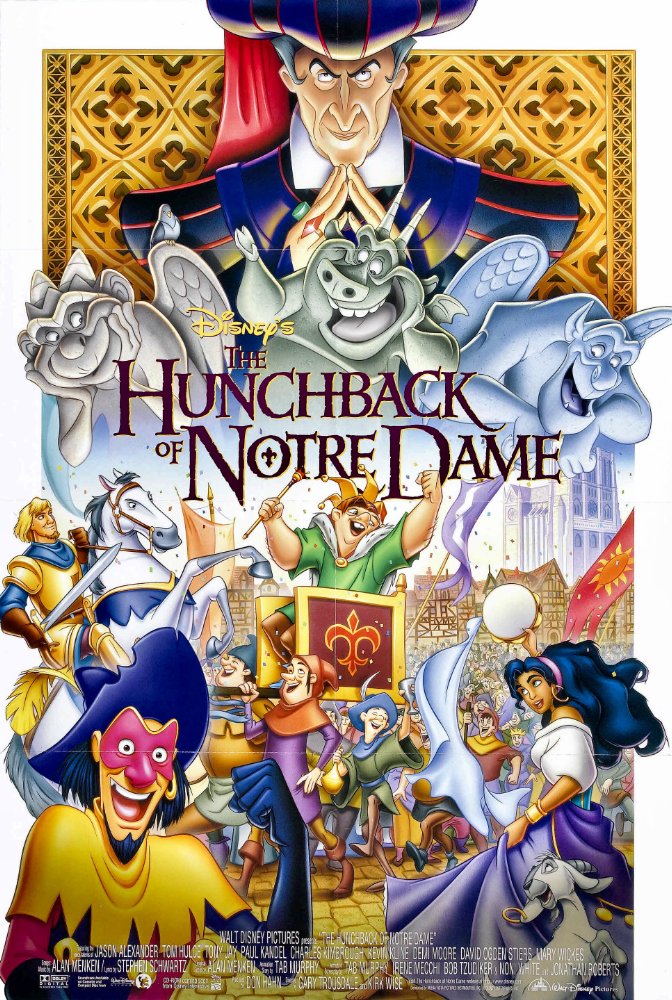 Plot: In 15th century Paris, Clopin the puppeteer tells the story of Quasimodo, the misshapen gentle-souled bell ringer of Notre Dame, who was nearly killed as a baby by Claude Frollo, the Minister of Justice. But Frollo was forced by the Archdeacon of Notre Dame to raise Quasimodo as his own. Now a young man, Quasimodo is hidden from the world by Frollo in the bell tower of the cathedral. But during the Festival of Fools, Quasimodo, cheered on by his gargoyle friends Victor, Hugo, and Laverne, decides to take part in the festivities, where he meets the lively gypsy girl Esmeralda and the handsome soldier Phoebus. The three of them find themselves ranged against Frollo's cruelty and his attempts to destroy the home of the gypsies, the Court of Mir.

The least cuddly of Disney's animated features, this musical adaptation fares into some dark and unusual thematic territory with excellent results.

This is a fantastic, over-looked gem from Disney animation. The adaptation of the Hugo book is surprisingly honest and accurate for a Disney film and the songs are some of the most emotional I've heard in an animation film, touching on some dark subject matter. The visuals of a pre-Revolution France are also awe-inspiring and impressive.

The adult themes carried over from the source material have to coincide with some of Disney's lesser simplicities. This is not a smooth combination. The comedy is weak, as well. The music is grand, but unmemorable. A few darker moments ring true to the original message of the story. This is a big mixed bag.

Frollo, a powerful king and a religious man is in charge of taking care of an ugly hunchback named Quasimodo in order to be forgiven of his sins, specifically, an act of murder. Quasimodo is in charge of ringing the bells in the chapel. But Quasimodo wants to be free, yet Frollo doesn't allow it. When Quasimodo finally does manage to escape briefly, he gets into a bit of a mess, but it helped by a rebellious gypsy named Esmerelda. Frollo, however, is obsessed with doing away with …

One of the best Disney movies great for Adults

Paris, 18 century. The Gypsies are followed everywhere they go in Paris, and one of the people behind this massacre is judge Frollo, a dark and evil man determined to kill all gypsies he follows. One day, he kill a gypsy woman who was carrying a baby, and when he saw the baby was deformed, he almost killed the baby trowing him in a pit, when the Priest who saw everything that Frollo did made him take care of the child. Frollo hated to do that, but he was scared since he was a catholic man so he did. 20 years passed and the name Frollo gave to the the was Quasimodo, that means 'almost formed'( a very cruel name). Keeping Quasimodo only inside the church of Notredame as the bell ringer and forbidding him to go out to the streets, Frollo was going to be the judge of the Fools Festival, one …

No posts have been made on this movie yet. Be the first to start talking about The Hunchback of Notre Dame!