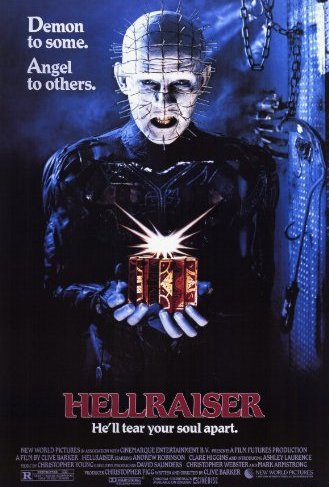 Plot: A man gets more than he bargains for when he opens the door to hell. His ex-lover, now his brother's wife, has found a way to bring him back but his tormentors, the Cenobites, aren't going to let him go easily.

"Hellraiser" has some nifty effects, makeup, and production design that are sickening and memorable enough to compensate for the weak story and bad dialogue. I just don't understand what the point to it all was, and I'm still not sure what a Cenobite is even supposed to be.

A cult classic and with good reason, HELLRAISER boasts one of those wildly original concepts that seem only to spring from the imagination of Clive Barker. It's gory and strange and uncomfortable - but there's a twisted sort of art to it that blurs the lines between the transcendent and the profane. The performances are not particularly strong, but the characters don't carry the film so much as the visual and auditory experience. More than twenty years later, the makeup and practical effects are still top notch and the music is fantastic. There's a reason this movie is so beloved in horror circles - it's visceral and beautiful, and everyone interested in the genre should experience it once. 4/4

A rather flimsy schlock horror film that has acquired something of a cult following over the years. Some inventive make-up effects but little else.

Cool storyline with not bad F/X for the time....

Usually the commen factor when watching any of the 80's horror franchises is low grade acting accompanied with F/X that is nowhere near the caliber it is these days. With that being said Hellraiser is a breed apart. Interesting storyline accompanied with not bad acting and pretty good F/X all accompanied with cool creatures either from hell or another dimension? The jury is not back on that one as of yet. Storyline is this... It begins in the city of Morroco as Frank Cotton makes a purchase from a mysterious chinese gentleman..a mysterious puzzle box..Frank, whilst messing around with the box unknowingly opens it letting out it's inhabitors..4 mutilated creatures from somewhere unknown..known as Cenobites their leader, pinhead, a creature with nails driven in all points of his head …

No posts have been made on this movie yet. Be the first to start talking about Hellraiser!