Harry Potter and the Order of the Phoenix Movie Information 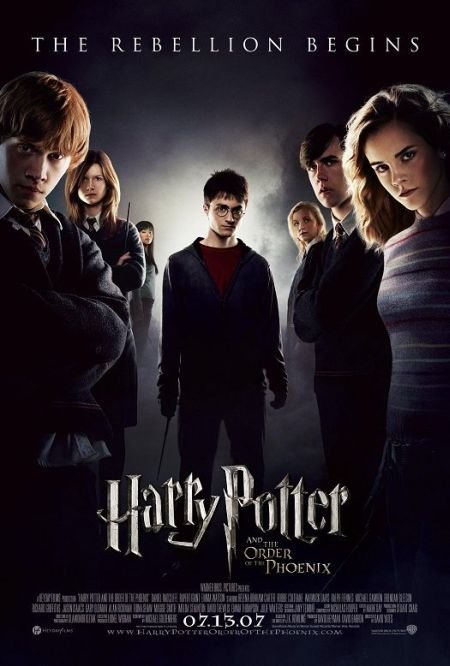 Plot: In his fifth year at Hogwarts, Harry is under pressure as the Ministry of Magic refuses to acknowledge the return of the evil Lord Voldemort branding him a liar. Meanwhile a delightfully evil new Defense Against the Dark Arts teacher is appointed by the Ministry and she turns Hogwarts into her own military state.

It doesn't add any new tricks to its magic formula, but "The Order of the Phoenix" takes an assured and serious step away from continuing to expand its already well-established world and towards exploring the characters who inhabit it.

In his fifth year at Hogwarts, Harry is under pressure as the Ministry of Magic refuses to acknowledge the return of the evil Lord Voldemort branding him a liar. Meanwhile a delightfully evil new Defense Against the Dark Arts teacher is appointed by the Ministry and she turns Hogwarts into her own military state. Everybody was mix about this movie saying it wasn't that good and some other people have be saying this movie was okay, but I really enjoy it.

Order of the Phoenix isn't a bad film, but it's a transitional one - a bridge between the wonder-filled childlike first few films and the darker territory of the later films. It's well-made and well-acted, but the plot is sometimes slow-moving and the exposition needed to translate the book to screen gets tiresome at times.

Weaker Than It's Predecessors, But Still Fun

Well I wouldn't call it a dud, but let it be known: Harry Potter and the Order of the Phoenix is easily the worst of the Potter films so far. Granted, this is still a very likeable and certainly recommendable production, but it's not as good as the first two Potter films, and not nearly as good as the second two.

Potter is failing to convince almost anyone that Voldemort is truly back, and those that do believe Potter have been ridiculed. Unfortunately, it is also believed that Dumbledore is planning a rebellion against the Ministry of Magic, so a new Defense Against the Dark Arts teacher is hired in order to avoid the practice of practical magic by students. This new teacher is Dolores Umbridge, who immediately makes many strict rules, and creates unfair punishments. Meanwhile, the …

Harry Potter and the Order of the Phoenix review

Harry Potter's fifth year at Hogwarts and have negative image because of the rumors. The Ministry of Magic refuses to believe the return of Lord Voldemort. A newly appointed Defence Against the Dark Arts Dolores Umbridge (Imelda Staunton), a senior Ministry official, teaches theories instead of practical magic. Harry, Hermione, Ron, Luna, Neville and Ginny fly to the Ministry of Magic to save Sirius Black. Bellatrix Lestrange (Helena Bonham Carter) kills Sirius and is confronted by Harry. Dumbledor battles Voldemort and aids Harry. Some of my favorite lines: Harry â âFacing this stuff in real life is not like school.â âWorking hard is important. But there is something that matters even more, believing in ourselves.â Snape â âWell, it may have escaped your notice, but …

Cornelius, I implore you to see reason.

Without a doubt, the most successful movie franchise of the Noughties are the adaptations of JK Rowlings Harry Potter books.
The boy wizard has now enthralled audiences for over a decade and even has his own theme park.
The films have significantly grown in stature over the years and Harry Potter, his friends and his enemies have grown up on screen. There has been little tinkering with the cast and formula and this has significantly helped to produce an entertaining and highly enjoyable series.
Order of the Phoenix may not have pleased everyone, large slices of the book were altered or simply left out but as a movie, Phoenix raises the bar. Not encumbered with too many special effect shots, there is ample room for character development and meaningful content. The actors involved …

No posts have been made on this movie yet. Be the first to start talking about Harry Potter and the Order of the Phoenix!