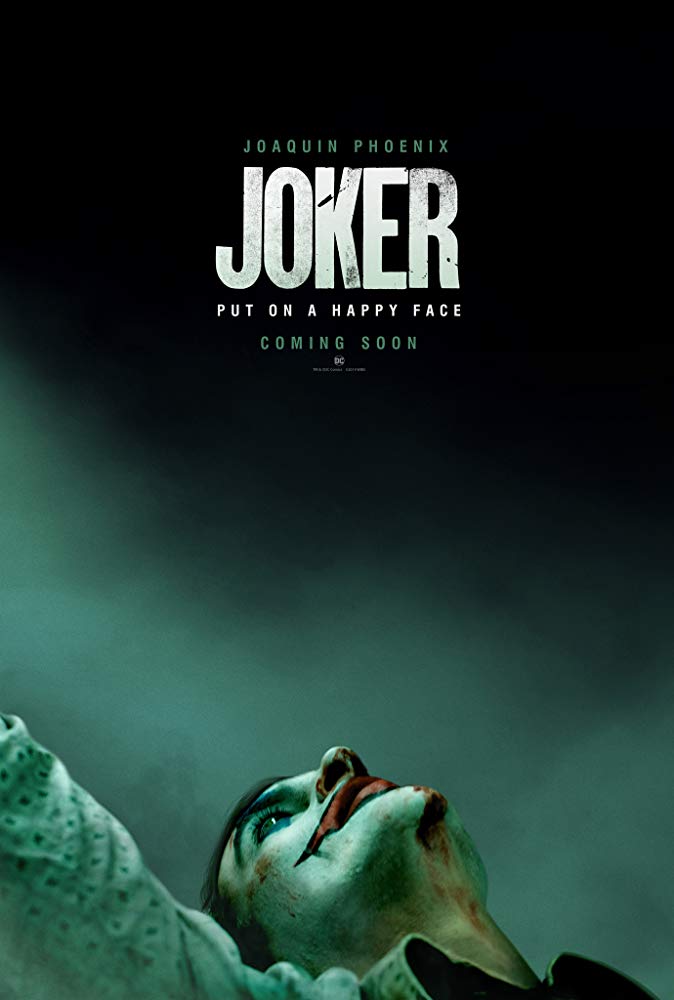 Plot: After his stand-up career goes nowhere, Arthur Fleck turns to crime in order to support his mother, a turn that leads him down a path of insanity, ultimately transforming into the supervillain known as The Joker. -- Chris Kavan

Joker is a tour de force descent into madness as Joaquin Phoenix gives the most grim-dark and grounded origin story for Batman's ultimate villain. Plus the film doesn't shy away from social issues such as class warfare and lack of options for those who need mental help. Punctuated by scenes of sudden violence with an exceptional score from Hildur GuÃ°nadÃ³ttir, I can see why the film was so polarizing but also why it is so powerful.

Joaquin Phoenix was absolutely phenomenal as Arthur Fleck. Some of the best acting Iâve seen all year. This was the most uncomfortable movie experiences I've had in awhile. A brutal dive into madness that was so bleak and yet so compelling. The score by Hildur GuÃ°nadÃ³ttir helped set the tone tremendously. A melancholy tone with a chaotic twist. The cinematography was gorgeous and thereâs a handful of shots that has imprinted into my memory. I like how they actually gave Thomas Wayne a character rather than âguy gets shot in alleywayâ.

Which is worse: Living a tragedy, or a comedy?

This is undeniably a great film. Each and every scene is masterfully crafted. Mis-en-scene, coupled with perfectly timed sound design and music, are on point making every shot worth consuming. THE actor lived up with the expectation. It's unimaginable to act as Arthur Fleck, and then the Joker. I bet that THE actor had to exert so much energy and truly understand the complexity of the character in order to effectively play the role. I am inclined to believe that the plot points are just right, nothing really fancy, it did not force anything, what happens just happens. Anyway, this is obviously a character-driven film. A character that no one seemed to fully grasp yet a character we definitely recognize. Not to mention the backdrop of all these acts; the cold dark Gotham City. Gotham is a …

Weltschmerz. Despair. Grief. Desperation. Those are the keywords that came to mind after watching this movie. If you are a superhero film fan and you expect heroic confrontations between this crazy clown and our bats-related superhero in a tight latex suit, you can safely turn around and skip this film. The interpretation of âThe Jokerâ by Jack Nicholson was masterful. He played a mean Joker who was obsessed with money and power. But without a doubt, Heath Ledgerâs interpretation is the most legendary. He played Jokerâs insanity and psychopathic behavior in an unparalleled way. An outstanding acting performance. What Joaquin Phoenix does in this film, however, is breathtaking and brilliant at the same time. After âYou were …

Itâs not a tragedy, itâs a comedy.

Joaquin Phoenix is fantastic as Arthur Fleck, aka the Joker. Heâs sad, disturbing, menacing, and haunting to watch. Of all people, itâs the Hangover guy that makes the best interpretation of the iconic character since Christopher Nolan did eleven years ago.
The tension is maintained throughout the movie. Itâs not a slasher film though. Much more of a slow burn in the mold of Taxi Driver. The recreation of Gotham City as this grimy seedy hellhole much like a Scorsesesque New York is wonderfully realized.
Itâs really not a heroic portrayal of the character either. At first viewers will pity Arthur Fleck for the hapless situation he winds up in. But soon learn heâs far more sinister and dangerous than they realize. It seems to me that the Joker persona he gradually becomes …

No posts have been made on this movie yet. Be the first to start talking about Joker!