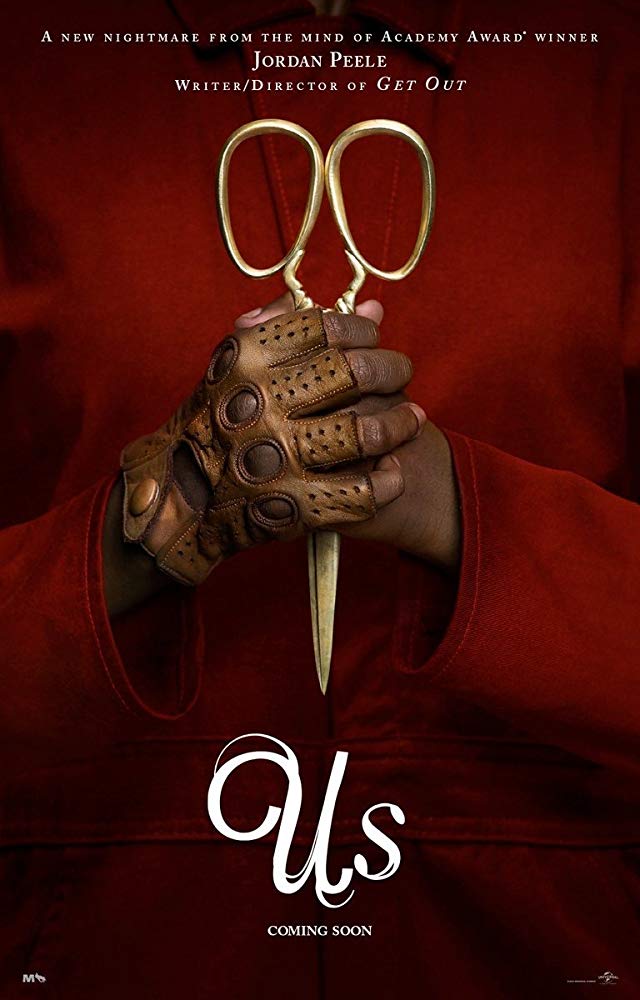 Plot: A family on vacation is terrorized by the appearance of a second family - one that is wholly evil and looks just like them. -- Chris Kavan

Jordan Peeleâs newest horror film after Get Out is a chilling and suspenseful movie with some creepy moments. Itâs not quite as good as Get Out. The premise is a tad stranger but not as scary. Lupita Nyongâo is fantastic though in the dual roles. She really elevates the movie. To its credit, the ending was a nice touch.

A smarter, stronger, darker, more nuanced, and overall better horror commentary than "Get Out," Jordan Peele's "Us" creates the origins of its monsters while letting the audience decide their meaning.

I don't understand all that fuss about "Us".

Jeremiah 11:11
Therefore thus saith the Lord, Behold, I will bring evil upon them, which they shall not be able to escape;
and though they shall cry unto me, I will not hearken unto them.

âGet outâ was a big nod to the racist past (and present) of the United States. A white, prosperous community who use African Americans to replace their worn-out bodies. A cynical story in which the physique of black Americans is being worshipped to some extent. And at the same time, itâs also distasteful because these American fellow men are regarded as superfluous individuals nobody will miss. Their disappearance wonât be noticed, so to speak. And a protagonist as a future victim, who can escape at the end with a piece of cotton (yes, a subtle reference). Itâs quite obvious this can be …

"If you wanna get crazy, we can get crazy.."

That moment when you trying to sound tough, but come across as doing a Christopher Walken impression.

âUSâ is no horror masterpiece, but does not waste an excellent concept in terms of execution and the talent involved. The film creeps into your thoughts long after leaving the cinema and already thatâs an achievement. This is Jordan Peeleâs second feature movie that takes a horror trope of a family in peril and goes âbut what if...â. While the movie dose stick with you long after itâs done, you slowly reflect on things that donât make sense when given some thought. However, I will take original concepts any day.

They're Us and We're Them

Jordan Peele is quickly becoming a modern horror master. Get Out was both a scathing take down of race relations in America as it was a harrowing tale of survival. With Us, Peele does the same thing for class warfare, while upping the horror quotient to once again deliver a unique experience - and a disturbing one at that.

The movie has inspired a lot of talk about what Us means - but the most important aspect is duality. Yin and Yang, Good and Evil, the Have and Have-Nots, Light and Shadow - take your pick, but the film is constantly reminding you with references to the number 11:11 - from biblical verses to baseball scores. This is also represented by the inclusion of many "two parts make a whole" from the Tethered using scissors as their weapon of choice to the song choice of "I …

Top Ten Films of 2019 by KingoftheCorn

No posts have been made on this movie yet. Be the first to start talking about Us!