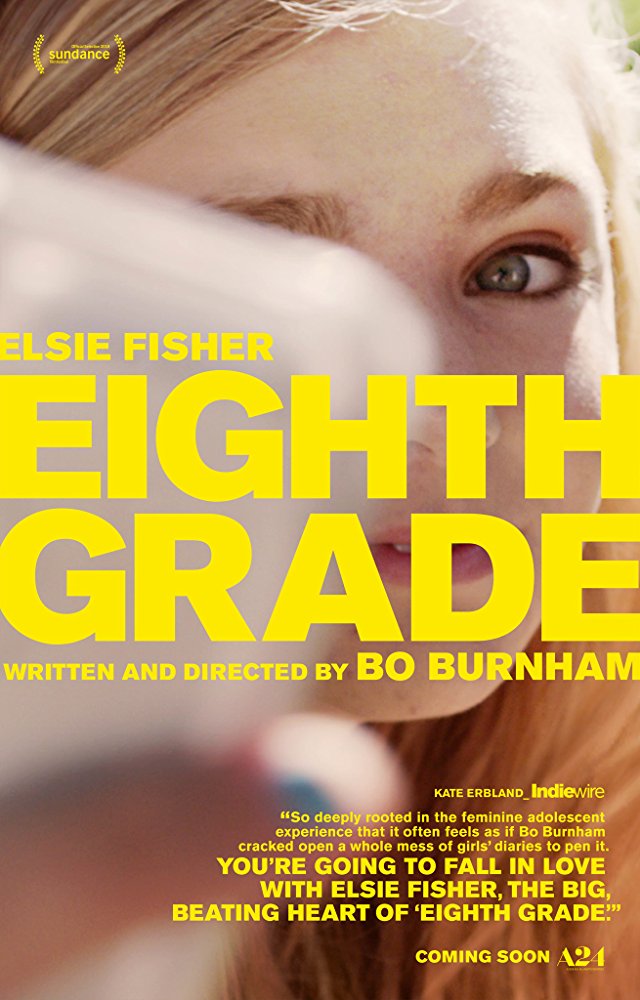 Plot: Kayla has lived through nearly a year of a disastrous eighth grade year. As we follow her through her last week in middle school before summer, we live her life in all its painful glory. -- Chris Kavan

What Bo Burnham has done with "Eigth Grade" is astounding. He's made a movie that not only captures authentic teen desires to be popular, but presents it so effectively that I was taken back to my own middle school days.

I felt the realness and awkwardness of the film, which is good because the material seems to go onto that direction. What I like about this film is how genuine it is with the material that I did not feel like it attempted to go big when it is not supposed to be one. The awkwardness and reality from the perspective of an eight grader were effectively conveyed in this picture. A good watch!

Bo Burnham has made an incredible feature film debut with Eighth Grade, one that's simultaneously hilarious, moving and truthful, with a star-making performance by Elsie Fisher. Burnham executes his brilliant script with such authenticity and infuses so much soul and humor into it, which is brought to life so beautifully by his amazing cast of actors. There's a beating heart at the core of Eighth Grade and something every viewer will find themselves relating to on a really deep and personal level. You'll laugh, you'll cry and you'll remember it for a long time.

"Growing up can be a little bit scary and weird."

'Eighth Grade' is an honest and relatable look on growing up. Almost hard to watch at times, but dose an excellent job of making you feel for the protagonist. Embracing it's cringe that many people, including myself are familiar with.

Bo Burnham perfectly captures the teenage phase with awkward close-ups and the camera focused on Kayla which shows her isolation. Who would've predict a comedian now acclaimed director.

Elsie Fisher (the coolest girl in the world) is so incredible that I completely forgot she acting. Before she was unknown, but now consider herself known after this. Also Josh Hamilton is fantastic as Kayla's lovable dad. There is not a single performance I did not buy in this movie.

By the end, despite the misery …

Seeing the World Through Different Eyes

No matter the medium - books, video games, film, I have found that the ones that stick with me the most are those that do the best job of crafting a compelling story from the point-of-view of a character that may be completely opposite of myself, but presenting it in such a way that feels organic, natural and just plain real.

Bo Burnham has done that with Eighth Grade and Elsie Fisher (who literally graduated from eighth grader herself, weeks before shooting this film) is perfectly cast as Kayla, the every-day teen just trying to get by in a social media-obsessed world. Fisher gives the most natural performance I have seen in a long time, whether it's in the relationship with her dad (played by Josh Hamilton), her attempt at crafting meaningful self-help vblogs or just simply trying …

No posts have been made on this movie yet. Be the first to start talking about Eighth Grade!