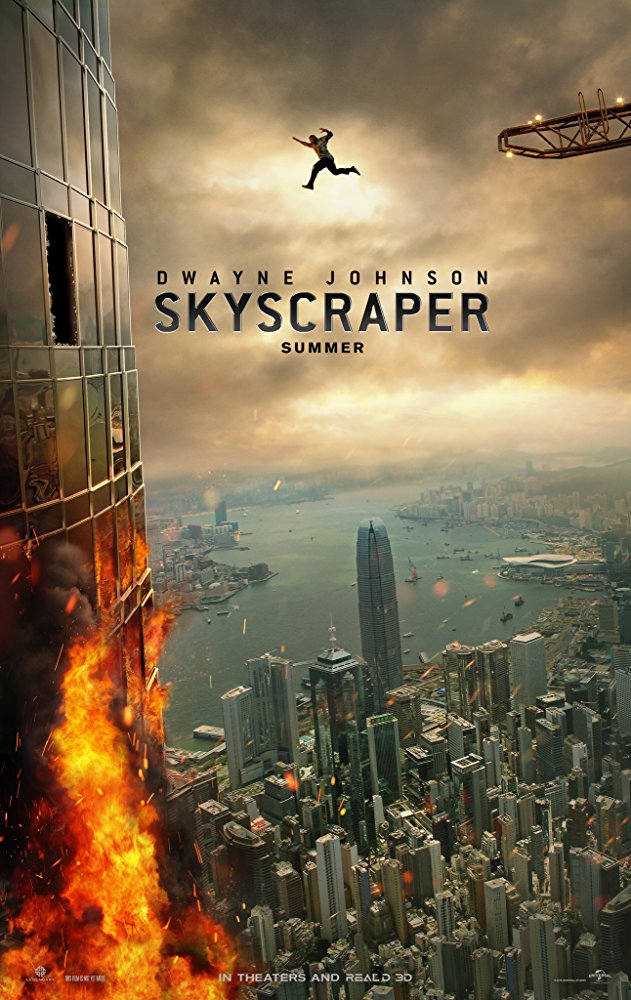 Plot: Will Ford is a former FBI Hostage Rescue Team leader and war veteran who now assesses security for skyscrapers. On assignment in China, where the world's tallest skyscraper has been built, the building is set ablaze with Ford framed for the crime. Now he must not only figure out how to clear his name, but escape from the building, as well as rescue his family who are also trapped inside. -- Chris Kavan

Big, dumb fun - this is exactly the kind of action movie you just have to switch off that portion of your mind that deals with things like &quot;reality&quot; and &quot;believable&quot; and &quot;plot&quot;. This is pure, unadulterated stupidity - and I think it knows it - so just sit back, relax and don't take things too seriously. Makes a perfect double-bill with Rampage!

Impossible. This is one of the most unrealistic action films I have ever seen. There were so much action happening without really explaining why is it happening and how the hell it is happening. A duct tape? seriously?? All the stunts showed in this movie were entertainingly unbelievable. I appreciate how it tried to weave things out in the end but 90% of the action made me wonder how could this probably happen in real life situation. I often enjoy action movies because it gives me idea how to survive from unfortunate situations, in this case, NO WAY CAN THIS BE POSSIBLE.

While The Rockâs family was trapped 220 stories in a burning skyscraper, I was trapped in a dark movie theater in Queens, seated next to @WWEMemesâ very own Matt Conklin, enduring the overly self-seriousness of this stupid action film. Dwayne âThe Rockâ Johnson generally has incredible charisma, but heâs awfully boring here, as is the film that surrounds him. Filmmaker Rawson Marshall Thurber didnât fully embrace the ridiculousness of Skyscraperâs concept, thus failing to deliver something wholly fun and entertaining in a âjust go with itâ type of way. Itâs just a disposable flick with a few standout moments.

Dwayne Johnson is one of the most likable and reliable action stars working today in Hollywood. However strange or silly his movies became, you were willing to suspend your disbelief because he's just that charismatic. It's a useful tool to hide the otherwise craven cynicism of film studios.
Unfortunately SKYSCRAPER is the first Dwayne Johnson movie in a long time that felt so completely unoriginal that not even Johnson could cover it up. Not only is it one of the most brazen rip-offs I saw in years but it's remarkably boring and unimaginative. You think the Chinese location shooting and the bizarre architecture would set it apart from earlier DIE-HARD ripoffs but it doesn't. It's only meant to serve literally as a background detail.
Instead of money, this time the villains are after …

Well at least it knows.

âSkyscraperâ is a disposable action flick starring Dwayne âThe Rockâ Johnson. Just looking at the advertisements you can already tell itâs gonna be those type of movies where you have to accept it to enjoy it. If you watched the trailer where Dwayne jumps off a crane into another building to rescue his family who are trapped inside, before cutting to the release date. Itâs absurd, although looks fun. Might follow the same path of âFast & the Furiousâ type of ridiculous, yet fun. However, what really took me by surprise is how the movie doesn't quite embrace itâs stupidity, and instead goes for a more serious tone. So during those ridiculous moments, when I meant to switch off my brain and enjoy, but I couldn't buy into …

No posts have been made on this movie yet. Be the first to start talking about Skyscraper!