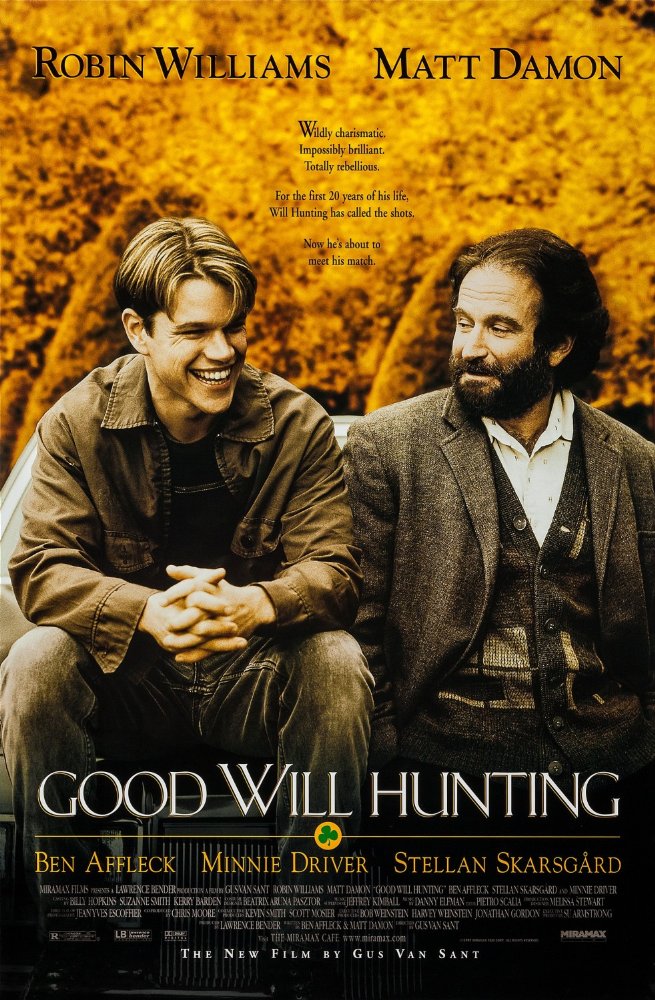 Plot: A young custodian at MIT is blessed with a gift for mathematics when his therapist tries to harness his gift to help his career for the rest of his life.

I love this movie. It's deeply emotional, has great acting, and at times packs political bite.

One of my absolute favorite movies. Watching Robin Williams and Matt Damon on screen is truly special. Must watch

TSean Maguire: "You know what's worst than being alone? being with some one who makes you feel alone". The film is about a young custodian at MIT is blessed with a gift for mathematics when his therapist tries to harness his gift to help his career for the rest of his life. This movie has some many good things about it like all of the actors do a fine jobs in there roles and the writing is really clever and am glad it won a Oscar for that. But the biggest star in this movie is the great Robin Williams. He did more than a good job, he was freaking brilliant and it's his best role that he ever did. Overall good will haunting is a stunning movie with powerful lines.

I loved this movie. I absolutely loved it. I was fascinated by every single aspect of it. Sure, the plot wasn't the most realistic, but who cares? Movies are entertainment, and that's all. The profanity was not that excessive if you spend any time at all with many lower to middle-class people around the age of the characters. In fact, it was downright realistic. As for the acting, it was wonderful watching Damon portray this character who has to struggle with what he thinks he wants, what he is told he should want, and what he finally realizes he really wants. No, I don't think it was the best performance of the year, but it was definitely one of the top five and worthy of a Best Actor nomination. The chemistry between him and Minnie Driver was electric, particularly during their first …

Easily one of the greatest movies of all time. The plot is great, the acting is phenominal, and the meaning is excellent.

The movie is about a troubled working class Boston kid named Will Hunting (Matt Damon) who is an absolute genius at math but has a bad criminal record. Instead of honing his skills, he spends alot of his time drinking wth his friends and beating up people who piss him off. Hey, we can all understand that. One day, however, he starts beating up this a***ole at a playground, and his arrested after accidentally hitting a cop. The judge makes him go to counseling and hone his math skills with an MIT proffessor (Stellan Skarsgard). Afte driving away several therapists, he meets his match with Dr. Sean McGuire (Robin Williams), who helps him see the light and allows him …

I Loved. This. Movie. Actually, the main character, who Matt Damon plays reminds me of the main character from A Beautiful Mind, before he went schizo. And this might sound sortta strange, and probably no one will agree, but I reckon that Matt Damon looks like what the 13 year old Leonardo Di Caprio should have grown up to look like (okay, so this is the first movie I've sen with Matt Damon). So now I'm gonna stop rambling on about things that don't relate to this movie now.
I really love this film because it's got a little bit of everything. A little bit of comedy, sadness, strangeness, realism, etc. I was surprised that Gus Van Sant directed this film because most of his other movies consist of people walking around, not doing or saying anything. Okay, so I know they are supposed to …

No posts have been made on this movie yet. Be the first to start talking about Good Will Hunting!