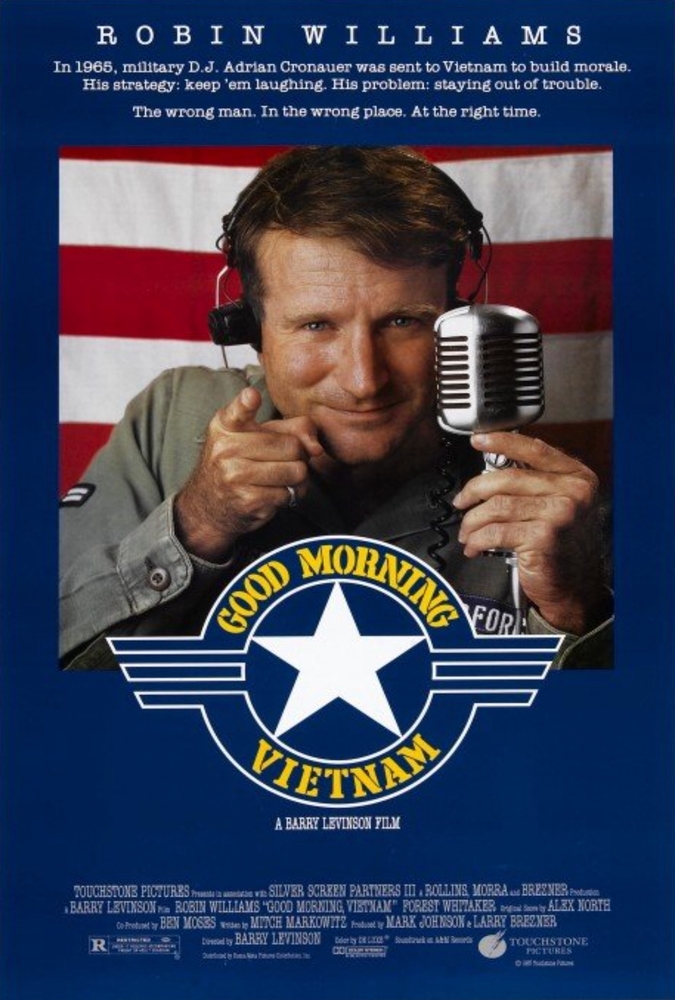 Plot: A DJ arrives in Saigon with a penchant for rock music and quick, scathing monologues. The brass are annoyed with his antics, but the realities of war soon come crashing down.

The third tribute of Robin Williams. Louis Armstrong song: "And i say to myself, what a wonderful world". This is the movie that I saw that Robin Williams in and he wasn't a goofy ball in this one. The acting in this movie was more than brilliant, it was outstanding and in my opinion the second best Robin Williams movie in this tribute week. The writing is sharp and well done and overall a great movie. "Sir, in my heart I know I'm funny".

The drama behind the scenes lacks subtlety and Williams' tirades on the microphone just aren't funny, but it's well meaning and the fact-based story holds the interest adequately.

Robin Williams uses his standup comedy energy to craft a role that balances humor and heartfelt emotion in a film that is a lighthearted take on war life outside of combat. It isn't as blackhearted or anti-war as M.A.S.H., but Williams' fearless performance elevates the film's sometimes sappy script.

A somewhat true story about a Armed Forces radio DJ in Saigon. I saw this on TCM and afterwards Robert Osborne says that Adrian Cronauer (Robin Williams) wasn't actually anything like the way Williams portrayed him. He wasn't funny at all. And, he was sent home, but not because of any wrong doing, his time was up.

With that being said, it was still an entertaining film. The scenes inside the radio station were hilarious and were also the most interesting part of the film. I found myself not caring about the female student at all. And, maybe it's just my movie cynicism, but I guessed correctly that his friend was going to turn out to be VC. It was obvious that he was saved from the bar.

Overall, I was entertained and Williams was great and deserved his Academy Award nomination.

No posts have been made on this movie yet. Be the first to start talking about Good Morning Vietnam!