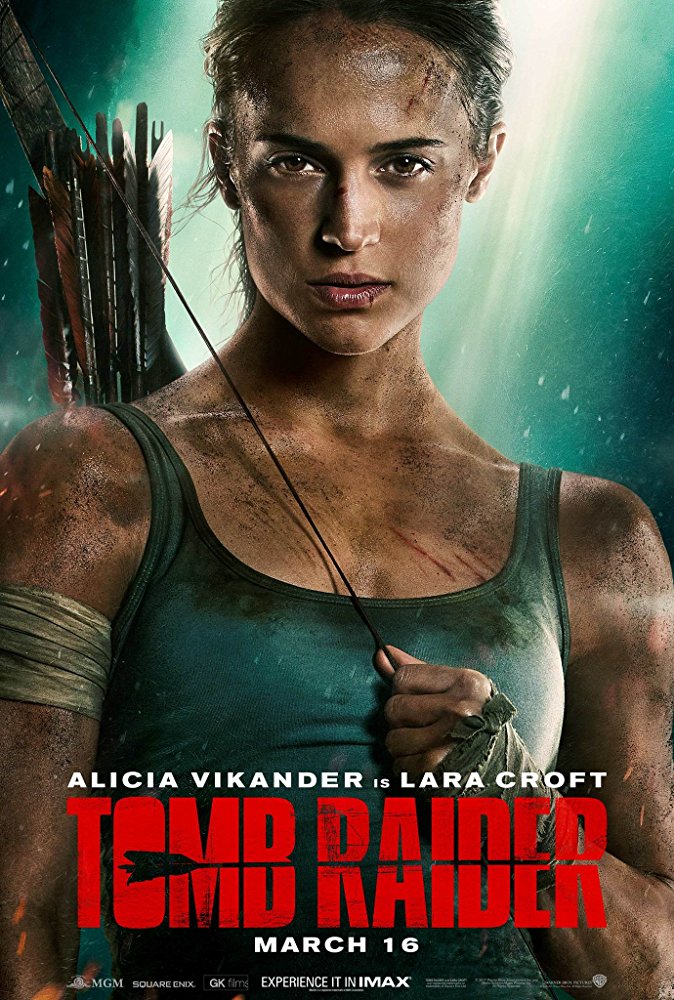 Plot: Following the disappearance of her eccentric and adventurous father when she was a teen, Lara Croft finds herself drifting through life with little purpose. Now 21, she goes against her father's final wishes, traveling to his last known location - a fables tomb on a mysterious island off the coast of Japan. But finding the island is just the first step in an epic adventure - one that alter her life forever and forge a new path for her to follow. -- Chris Kavan

To call it better than most video game movies isn't saying much, but 2018's "Tomb Raider" is exiting entertainment equipped with the energy and spirit of the franchise its based on.

Dose anyone remember when this came out? Because I didn't until now. 'Tomb Raider' isn't a terrible movie, especially considering it's based on a video game which is usually poison with adaptions. However, film making wise it's pretty bland and looks like a Netflix movie at times. The dialogue is patchy with some laughable line delivery. The visual effects are terrible and painfully noticeable during action scenes. The villains are just whatever - the only thing worth mentioning is their bad facial hair. Honestly, Alicia Vikander is the saving grace, as I thought she was solid as Lara Croft, but shes too good for this movie.

Vikander is stunning as usual but that's all this film can offer. There were a lot of inconsistencies, technical-wise (the lighting, the design, etc.). The action were there but didn't feel like REAL ACTION. More like a Temple Run and the player surprisingly survived the whole run. And I wished the story could have been deeper.

A young aristocrat discovers a clue as to the fate of her missing father and so charters a boat to a remote Japanese island, only to be captured by a shadowy organisation intent on finding the secret behind an ancient curse.

Rebooting the rather feeble pair of films starring Angelina Jolie in the eponymous role, this latest incarnation features a reasonably watchable Alicia Vikander running, jumping and solving puzzles in order to prevent the body of a Japanese princess from falling into the hands of âthe baddiesâ. Tomb Raider has very much the feel of a studio project designed as a ârevenue streamâ rather than a piece of cinema; Lara herself has been repurposed as a streetwise urchin who cycles around London to an âurbanâ soundtrack, no doubt in an attempt by its …

Don't sulk Lara ... you're an adventuress.

âVogel canât find the tomb without me,
and since Iâm dead andâ¦
since youâve burned the rest of my research,
he will never find it.â

I was actually looking forward to watching this new version of âTomb Raiderâ. Not only because I had a lot of fun with the PC game years ago (and amazed by the used graphics in those days). And not because Lara Croft was a hot and good looking video game character. Equipped with a couple of huge boobs, wearing tight hotpants and she used to make those horny little cries whenever she bumped into something. No wonder she had a large male fanbase. But also because I appreciated the film with Angelina Jolie. And at the same time, I was curious how her successor Alicia Vikander would handle it. And to be honest, that was the biggest …

Origin stories are the hardest to make work because they are often too bland, too easy and, in the case of so many films, already been done before. Superhero origin stories are often the weakest because half of the movie is a set-up until will get to the meat of the story. Tomb Raider manages to be better than most origin stories because it gets to the action relatively early while still building up a decent character.

That character is, of course, Lara Croft. While Angelina Jolie did a great version as the knock-out explorer who is seasoned and badass, this version of everyone's favorite Tomb Raider is based on the newest games in the series. This Croft isn't a badass, yet, just a young woman trying to find her place in the world. Casting-wise, Alicia Vikander is a major coup. …

No posts have been made on this movie yet. Be the first to start talking about Tomb Raider!