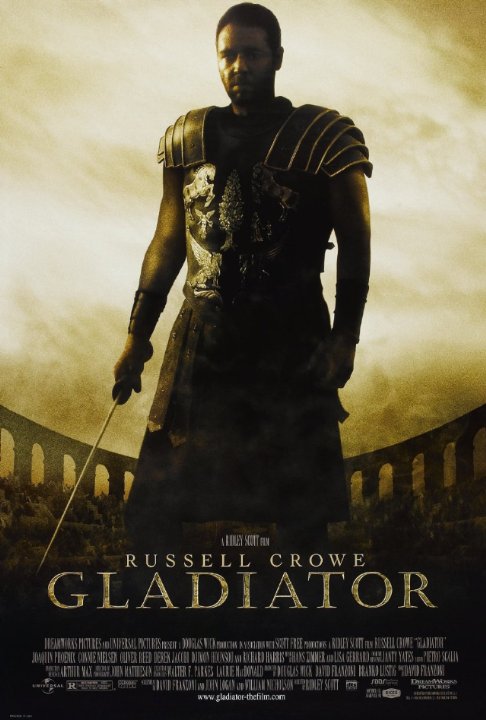 Plot: Maximus, a general and friend of Caesar, is sold as a slave by the new emperor to protect his thrown from Maximus who is the chosen heir. He fights as a gladiator to slowly wait for his revenge.

"Gladiator" is a flat and exhausting sword-and-sandal epic that sadly isn't one of Ridley Scott's finest.

Ridley Scott crafts a triumphant recreation of ancient Rome - capturing the bloodthirsty spirit of the time, as well as the decadent political climate. The film boasts impressive set design and effects - creating the awe-inspiring carnage of the gladiatorial battles in vivid detail. Russell Crowe makes for an inspiring hero, but Joaquin Phoenix steals many scenes as the slimy and treacherous villain. A truly impressive achievement.

This movie is amazingly good. It is a MUST-SEE before you die. Absolutely Amazing!

Are you not entertained?

Marcus Aurelius: "Death smiles us all. All a man can do is smile back".

The story is about a man robbed of his name and his dignity strives to win them back, and gain the freedom of his people, in this epic historical drama from director Ridley Scott. In the year 180, the death of emperor Marcus Aurelius (Richard Harris) throws the Roman Empire into chaos. Maximus (Russell Crowe) is one of the Roman army's most capable and trusted generals and a key advisor to the emperor. As Marcus' devious son Commodus (Joaquin Phoenix) ascends to the throne, Maximus is set to be executed. He escapes, but is captured by slave traders. Renamed Spaniard and forced to become a gladiator, Maximus must battle to the death with other men for the amusement of paying audiences.

For once the Oscars got …

More than just a 'boys' movie!

One of the movie's best lines: â My name is Maximus Decimus Meridius,Commander of the Armies of the north, General of the Felix legions, loyal to the true Emperor, Marcus Aurelius, father to a murdered son, husband to a murdered wife, and now I will have my vengeance, in this life or in the next.'

Father, I would have butchered the whole world...if you would only love me." â Commodus

Ridley Scott's modern classic may take a lot of cues from the likes of Spartacus and Ben Hur but in many ways it surpasses them. The thrilling combat sequences are as good as any committed to celluloid and as impressive the CG recreation of ancient Rome is, it's the wonderful dialogue, characters and design that breathes life into it. Russel Crowe charismatically heads a magnificent cast, featuring Richard Harris as the ageing Marcus Aurelius Caesar tired of conquest and wishing to leave a legacy after his death, veteran Shakespearean Derek Jacobi providing the political intrigue behind the scenes, scheming to replace the Emperor with a democratic republic, Oliver Reed as Maximus' new mentor dreaming of recreating past glories and Connie Nielsen as the conniving Lucilla whose true motive …

No posts have been made on this movie yet. Be the first to start talking about Gladiator!