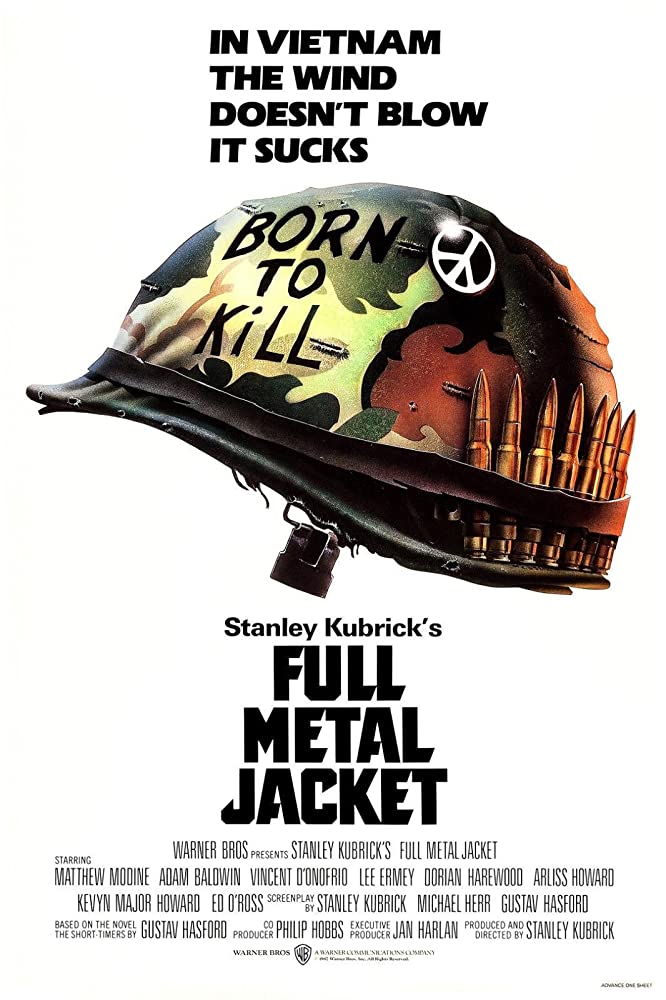 Stanley Kubrick's Vietnam War drama is an odd duck that is really a mashup of two different movies. One is a dark haunting psychological thriller while the other is a wacky black comedy Both happen to feature Vietnam and both are true to Kubrick's style. But the first half is better and the second half doesn't ever fully measure up. Vincent D'Onofrio and R. Lee Ermey are as memorable as expected and the rest of the cast doesn't stand out aside from Adam Baldwin playing a gung-ho racist bumpkin.

"Full Metal Jacket" doesn't cover anything new for Vietnam War films, but is just as raw, vivid, and engrossing as past additions to the genre.

Stanley Kubrick you are a master class.

One of the better anti-war movies.

I've said enough about Stanley Kubrick. The guy was a genius, a master of his craft and is my favorite visual director. He was crazy and not much of a treat to work with, but he made some darn good films.
Full Metal Jacket is no exception.

There are grandiose moments all over in this film. Every shot contributes something, you get that feeling when you watch the slow motion sequences if the recruits running through a lake of mud and Gunnery Sergeant Hartman spewing insults at them while keeping a straight face.
R. Lee Ermey plays Hartman and he steals the entire movie for me. He is on the top of his game and has me laughing every time he is on-screen. You want to see a good actor? Watch FMJ and tell me all of that was scripted.
I simply adored the characters and the way they …

The movie follows a young recruit from the boot camp to Vietnam. In this time he learns a lot and gets mean to the brutality of war and the preparation to it...

Stanley Kubrick is one of my favorite directors though I only have seen a few movies of him. Some people say he has two sides: the writer and the directorÂ´, and that he is only perfect in the second one. But in this movie both is perfect.The Screenplay is brilliant, it has so much to say about the Vietnam-war and still it had good dialogues in it. But it lacks in character development and in the middle the movie gets a bit long and slowly. The direction is perfect, especially the "sniper-scene".
It all fits.
The acting is average, except of R. Lee Ermey he is incredible as Sgt. Hartman. The way he is "bullying" the …

Full Metal Jacket is almost like two films wrapped into one, only I don't really mean that in a good way. The first hour is absolutely brilliant, featuring witty lines and two phenomenal performances from Vincent D'Onofrio and R. Lee Ermey. It follows a group of Marines through their journey in boot camp. The second half of the film follows the Marines as they serve in the Vietnam War. Unfortunately though, it's not as brilliant as the first part. In fact it's a little boring and pointless which has always been my problem with Kubrick films. The battle scenes were great, but all the while I felt like something was missing. Overall Full Metal Jacket is a good film, but it falls off dramatically after the first hour or so. Another disappointing Stanley Kubrick classic that I didn't like.

Best of the 80s by Protozoid

No posts have been made on this movie yet. Be the first to start talking about Full Metal Jacket!