From Dusk Till Dawn Movie Information 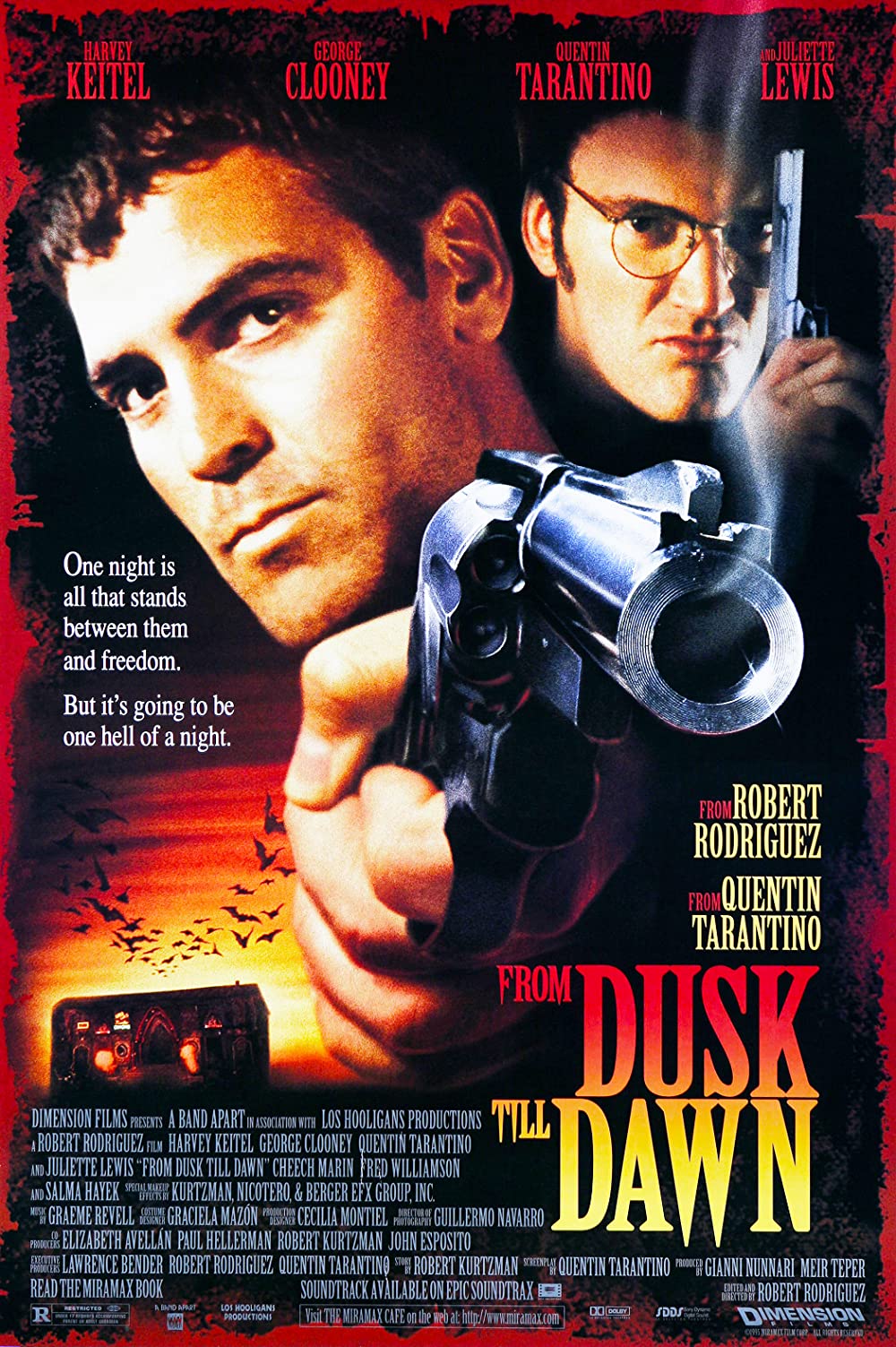 Plot: Two brother criminals high-jack an RV heading to Mexico when they end up at a exotic dance club in which they turn into vampire type menaces.

It takes its time building to its vampire twist, but when the metamorphosis finally happens it proves mostly worth the wait.

Endlessly entertaining masterpiece which starts out strong with unique characters and dialogue (a Tarantino staple) and just gets better and better. There are truly no bad parts in this wonderful story. The quotes are unreal. The graphic violence is laughably over the top. Overall you really couldn't top this movie until Sin City came out.

I was really getting into the first half of this movie but I kept thinking: wasn't this listed under horror? And then the vampire strippers came out and everything went from great to hilariously great.

I really loved George Clooney in this film. I thought he was absolutely amazing. He's hot, young and clever. However, I didn't like how he used the word "faggot" or "Jap" and I know that he was just reading the script so I don't appreciate Robert Rodriguez putting those words in the script. I do realize that when the movie was made in the 80s people probably didn't think those words were a big deal so I completely understand if anyone disagrees with me. I just didn't like that part.
The plot was good and the gore was good and I liked how there wasn't a stereotypical damsel-in-distress. All the women were vampires and the teenage girl helped kill a few. I really liked that.
The humor was also really good. However I would not recommend you to see this movie with your family under the age …

"From Dusk Til Dawn" by Yojimbo

A pair of ruthless bank robbers on the run to Mexico hijack an ex pastor and his children, only to be trapped in a strip joint full of vampires. The first collaboration between Robert Rodriguez and Quentin Tarantino, From Dusk Til Dawn is half twisted road movie, half schlock horror with a wide streak of humour; Grindhouse beta in other words. It's also the film that made the male population finally understand what the ladies were on about when we collectively developed a huge man crush on Clooney whose fantastic performance as Seth Gecko turned him from soap star into Mr. Coolest Of The Cool. He's ably supported by Quentin as his psychotic and delusional baby brother and Harvey Keitel as the hard-assed preacher, as well as some cameos from Sex Machine from Dawn Of The Dead and Shaft …

A Must for Vampire Lovers

One thing that's always driven me nuts about vampire movies is that there's just way too many of them. Same with King Arthur movies, too, but "From Dusk Till Dawn" obviously isn't a King Arthur movie. Despite the enormous size of vampire films, "From Dusk Till Dawn" was worth it. One thing that you always want to expect from a vampire movie is lots and lots of blood, and you get it, as well as a lot of nudity and profanity, but not a whole lot of sex.
The movie was about two criminals, both brothers (Played by George Clooney and Quentin Tarantino), and they cross paths with a former preacher (Harvey Keitel) and his kids. They take over his RV, and is forced to a strip joint, but little do they know that vampires
It was also quite odd, but that was one of the beautiful things about …

No posts have been made on this movie yet. Be the first to start talking about From Dusk Till Dawn!