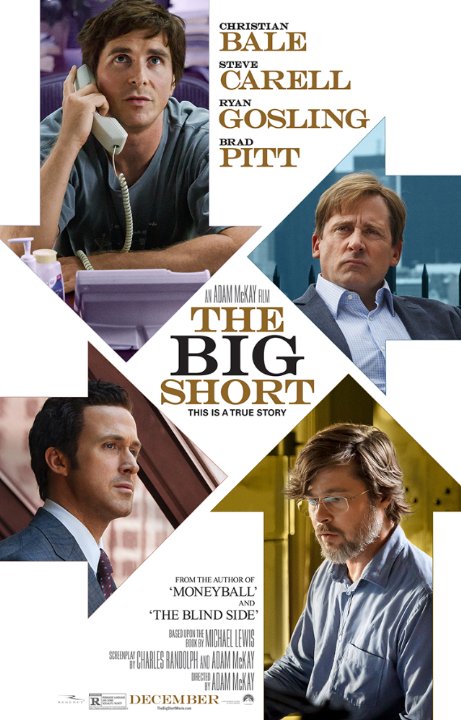 Plot: As the US approaches an invetable housing and credit meltdown, a group of calculating and unscrupulous men take advantage before the bubble bursts and make millions off the misery that follows. -- Chris Kavan

It's sometimes a little too on the nose that it comes off as more uncomfortably honest than funny, but "The Big Short" is an effective, cynical, and fully aware satire of a devastating economic crisis that ruined some, but profited others.

It's not flawless, but The Big Short does an excellent job of explaining the worst economic meltdown of our time in a way the average person could understand. And yes, fourth-wall breaking turns from the likes of Selena Gomez, Margot Robbie and Anthony Bourdain actually help. The characters are excellent and the film balances humor with depressing reality. I think they tried to fit too much in - but, for the most part, a wonderful look at how corporate greed and corruption totally screw the average American.

It's too bad the character development felt rushed and the direction was all over the place. So many spectacular moments and yet the pacing wasntoo errati. Why not remove the sensationalized ciseo editing and focus on the story. The story and real people involved were interesting already in the beginning. Felt this could have been executed better but the overall plot, acting and music was untarnished.

So I've finally saw The Big Short this week and I thought it was pretty average. Steve Carell, Christian Bale and Brad Pitt all gave terrific performances, and I'm so happy that "Foxcatcher" wasn't just a one off for Steve Carell. The writing was great and some of the 4th wall breaking in this movie was good, and yes the characters actually do turn to the camera and say whatever their thinking.

I like Ryan Gosling a lot as an actor, but in this movie he didn't do anything that special (in my opinion). I just wish there was a little bit more to his character then what we got. I'm not saying that his the worse part of the movie, but he's only there to narrate the story and explain a lot of things that happen in the film.

The Truth Will Piss You Off

'The Big Short' retells the events that led to the economic collapse of 2008, doing so in both informative and entertaining fashion thanks to great performances, smart scathing humor, and a unique storytelling format. This is a cross between a biography and a documentary, while also containing individual asides where the actors (and guest celebrities) break the fourth wall to simplify the banking terminology and to continuously remind us that what we are seeing actually happened. These moments are very beneficial. They serve to help us easily digest the facts and add harsh commentary on the overall misuse of money that caused this massive oversight. The injustices done are still treated with seriousness. I was thoroughly entertained, but I never lost sight of the terrible true …

No posts have been made on this movie yet. Be the first to start talking about The Big Short!