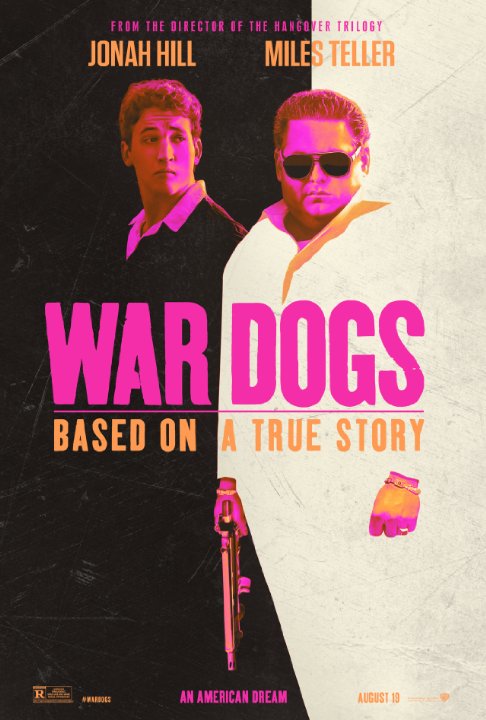 Plot: Based on a true story - David Packouz and Efraim Diveroli and two party-hearty bros living in Miami who discover an exploit that allows small business to bid on government contract. Starting small, things get out of hand when they find themselves under a $300 million contract to arm the U.S. allies in Afghanistan. -- Chris Kavan

High hopes of sharp political satire are shattered by its generic and often witless bro-comedy kicks.

I like how it used a comedic tone to this real and serious story about Afghan deal and and the illegal things related to it. As usual, Hill did spectacular and Teller is going there.

I actually remember reading the Rolling Stone article (Arms and the Dudes - also the film's original title) - though not the full book that followed. In any case, though certain liberties are certainly taken with this true story, it is still enjoyable and Miles Teller and Jonah Hill have a great time with their respective roles. I think the movie could have sent a more powerful message, rather than have fun, but overall, it's not a bad film and, once again, proves that real life provides infinitely more surreal and maddening stories than anyone could try to fabricate.

"That sounds illegal". You've no idea.

Todd Phillips brings his directorial chops to the crime-comedy-biopic about two millennials that managed to con a $300 million contract from the Pentagon during the Iraq War. It's about as absurd as it sounds.
From what I read, the more absurd parts of the story aren't true which is a shame because they're often a lot of fun. Miles Teller and Jonah Hill embrace the hedonistic immaturity of their roles with glee. Jonah Hill's Efraim Diveroli might not become as iconic as say Ferris Bueller but he's arguably a more interesting character. I mean, did Bueller ever fire an AK-47 at some gang-bangers in South Beach? Or drive a truck full of illegal weapons right to Baghdad?
While War Dogs is mostly enjoyable, there are questions that arise if you're paying close attention. For example, it …

Action movies should not be taken too seriously. War Dogs, not necessarily a full-on action movie, is a brilliant film because it heeds the previous sentence. I firmly believe that this movie is the most underrated film of the year. How did I come to that conclusion? Let's find out!
First off, the acting is purely superb. This is the best performance I have seen by Miles Teller in his career (Yes I saw Whiplash if you were wondering). Jonah Hill kills it too as well as the less seen Bradley Cooper.
This film is extremely well edited. The soundtrack is great. The humor is SITUATIONAL. This is the film that needs to be recognized as a movie that Hollywood needs today. How often do we get great R-rated action-comedies these days? It used to be the norm, and I think with enough support, …

'War Dogs' is based on the true story of two college age friends who become illegal gun smugglers by way of a get rich quick scheme to exploit government controlled gun trades. They abuse a system which allows buyers (US military) to take bids from literally anyone, thus opening the floodgates to many under-the-table illegal deals. Their plan does make them very wealthy in a very short amount of time, growing their tiny fake business into a giant fake one almost overnight. Of course, that comes at a huge price when the two disagree about the state of their affairs and ruin their biggest job and their lives in the process. This quick rise-and-fall method of power in storytelling has been seen countless times in film to great effect. Here though, that effect is only mimicked in the …

No posts have been made on this movie yet. Be the first to start talking about War Dogs!