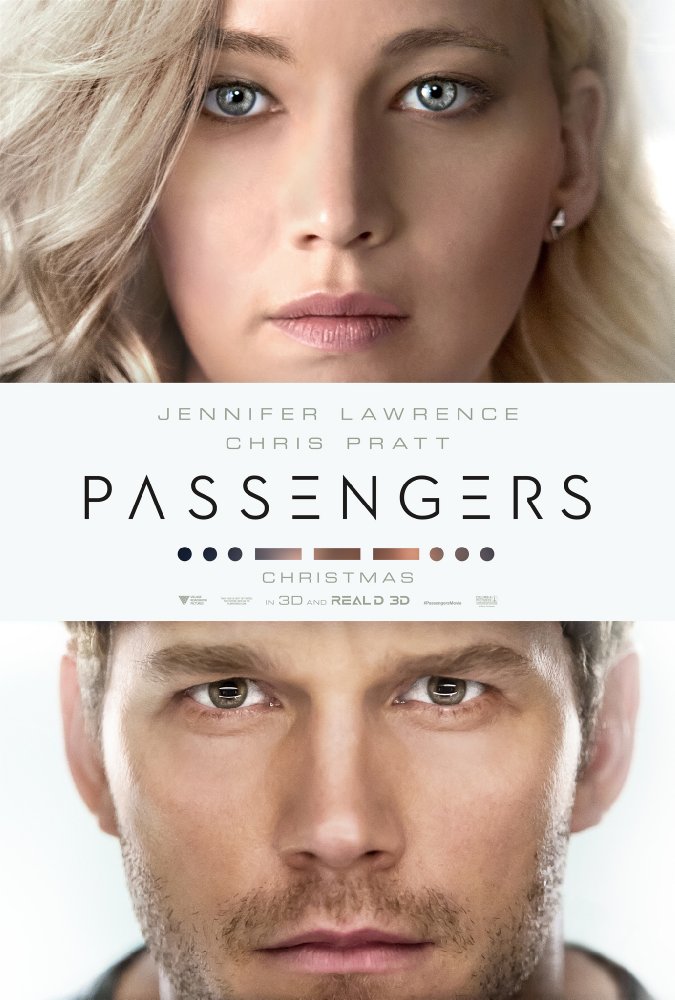 Plot: On a long-distance space flight destined for a distant colony, a malfunction in the sleep system causes two people out of the thousand passengers to awaken 60 years early. -- Chris Kavan

Full of special effects, "Passengers" is a stunning visual treat, but offers little in ways of a "thinking" film.

Passengers features two charming and likable actors in an ambitious but uneven movie that blends science fiction, romance, mystery, adventure, and drama into a single story. The film is entertaining but then there's the elephant in the room. The second act has a plot twist that changes the dynamic of the characters' relationship which becomes uncomfortable if not creepy. It leads to an overblown climax which wraps things up yet you the viewer still have a bad taste left in your mouth. It's pretty looking and again, the two leads are fine together but it suffers a stumble the movie never recovers from.

It wasn't as bad as I expected.Breathtaking images

"We were woken too soon... Ninety years too soon. We have too go back to sleep. We Can't !"

At first, I just tried to ignore this movie and I was hoping I would come across it someday on some television channel during a quiet Saturday night. First of all because I'm not dying to see a movie with Jennifer Lawrence acting in it. Even if the antagonist is played by the charming Chris Pratt. And also because there were a lot of indications that this would be a typical romantic space story. I thought this would be the galactic version of "Titanic". Only that the spacecraft won't hit a banal iceberg and those two turtledoves won't be standing on the bow of the ship while embracing each other intimately with a cosmic wind rustles through their hair. Or maybe a modern version of "Loveboat" …

"Passengers" has an interesting story, solid cast, and raises it's questions, but was poorly exacted on screen. A story like this it could've been anything. A horror, mystery, romance or just a movie with Pratt by himself. Well technically all four are combined together. A premise this good, it tries to be everything at once, because it doesn't want to miss a opportunity of being something else. When you find out the actual story that the trailers once again lies about, it's pretty creepy and makes Pratt's character selfish.

But with that said, I actually enjoyed the movie and didn't hate it like everyone else. Which is surprising.

I liked the first 30 minutes of film that really got the feeling of fear and anxiety spot on. Even Chris Pratt was pretty damn in the first act, when he …

While the chemistry between Chris Pratt and Jennifer Lawrence is excellent, Passengers suffers from one too many flaws that, at first glance, are easy to overlook but the more you dwell on things, the more it takes you out of the film.

The setup is pretty good - the Avalon is a colony ship on a 120-year journey to Homestead II - a lush planet perfect for starting a new life. After running into an asteroid field, several malfunctions occur, including that of one of the hibernation pods. Jim Preston finds himself the only human awake on the Avalon with just an android butler (played by Michael Sheen) to keep him company. For a whole year he tries to occupy himself - food, alcohol, games, putting his technical know-how to some use - but ultimately comes to a point where the only way out …

No posts have been made on this movie yet. Be the first to start talking about Passengers!