The Fox and the Hound Movie Information 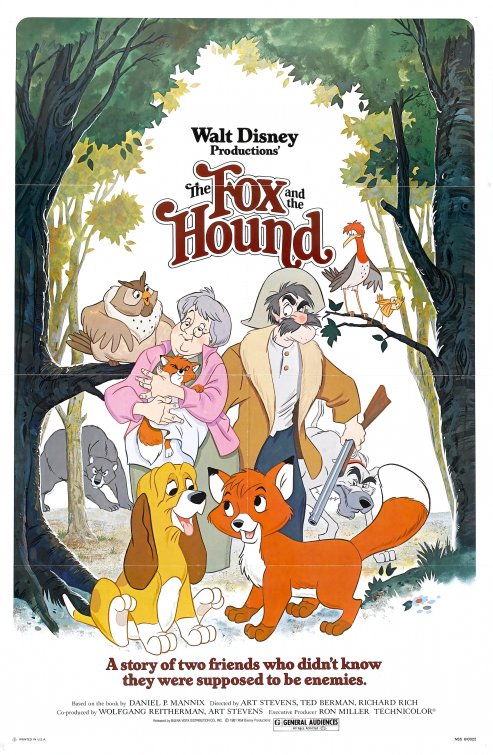 Plot: An unlikely friendship develops between a hound dog pup, Copper and a baby fox, Tod. As they grow up, their relationship is strained as Copper is expected to hunt fox. Is their childhood friendship strong enough to survive? -- serioussir

The most depressing and cynical animated feature Disney has ever produced, but that's exactly what keeps it from succumbing to unnecessary sweetness.

Saw this again on the Disney Channel. One cannot deny the emotions seen on the main character's eyes. The direction was a bit snail paced and soundtrack dull. Valuing friendship, effects of temper and other values were well portrayed. A it dated in terms of animation though the voices utilized were entertaining. The Fox and the Hound is one of the few cartoons that could have been better, but is a good watch for kids.

Utilizes a very simple story to focus solely on the core relationship between these two animals. Their shared experiences are genuine. This is a nice warm Disney flick that earns its emotions.

The Delicacy of the Opposite

How fragile a relationship can be when between polar opposites. Co-existing is one thing, but building a bond and securing a friendship is another. What's key here though isn't the status in which the would-be rivals meet nor form the bond, but rather the nature in which it was formed in the first place. Innocent and unknowing can be used to describe it, as can young and foolish. It refutes the popular misconception that what isn't known isn't harmful. It presents the idea that it's exactly the opposite. And what better way to do it then with a children's movie.

The Fox and the Hound tells the story of two young, talking animals, a fox and, you guessed it, a hound, that become friends despite their natural instinct to be enemies. Being young and not very wise, the two are oblivious to …

No posts have been made on this movie yet. Be the first to start talking about The Fox and the Hound!