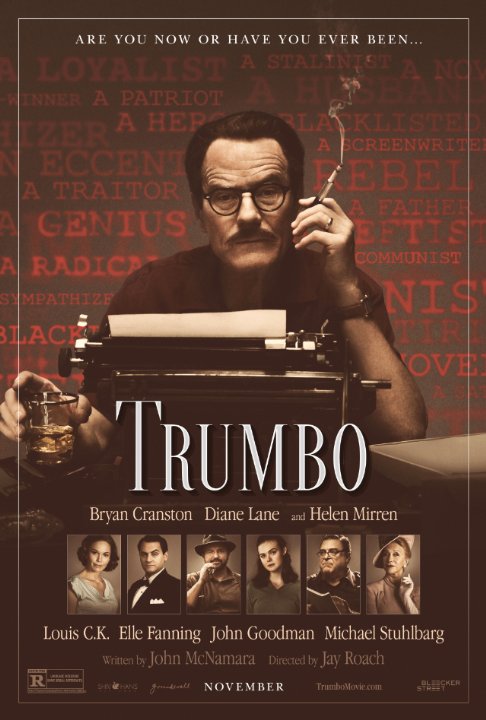 Plot: Dalton Trumbo was one of the most successful screenwriters in the 1940s, winning an Oscar for Kitty Foyle. But as WWII swept across the world, his political view and ideologies clashed, and, along with publishing the novel "Johnny Got His Gun", he would eventually become the most famous face to be blacklisted by Hollywood. -- Chris Kavan

Being overstuffed with humor, resonating political commentary, and enjoyably good portrayals of real life Hollywood icons is what makes "Trumbo" so good, but also a little exhausting.

Trumbo is funny, charming, classy and has a heart, but it dose suffer from a lot of flaws that weights it down a little. Bryan Cranston is freaking excellent in this movie and so is everyone else. But this movie dose feel like a TV movie at times and it's way too corny for it's own good. But still, it's watchable.

Trumbo: as accurate as Dumbo is about the circus..

At first glance, this looks like a breezy and glossy biopic of Dalton Trumbo who was famously blacklisted for his Communist affiliations and ostracized by his Hollywood colleagues. It looks like it's taking place in the Golden Age of Cinema and the acting is good for the most part. Bryan Cranston IS good and his old-timey manner of mugging the camera suits him well.
BUT...and it's a BIG but, what Trumbo is actually doing is insidiously whitewashing an uncomfortable part of Hollywood's history. The real Dalton Trumbo was hardly a champion of the 1st Amendment like say Larry Flynt or Howard Stern but was in truth a vocal supporter of Stalinism and the Soviet regimes that were in power in East Europe. Edward G. Robinson is portrayed as a snitch when historically that was not the case at …

'Trumbo' is not the behind-the-scenes of Hollywood biography I was hoping for. The film tackles a major issue in the film industries past by repeatedly telling us how it was a wrong injustice. I agree, but I'd rather have been told something new. The time period is represented well. You get a sense of every different point-of-view on the whole Hollywood Blacklist debacle. It does a good job of informing us of how things went down. In doing so, there's a lack of dramatic investment. More time is spent on hammering home the obvious politics and not enough on character and story. I never sided with anyone outside of Trumbo, and that's only because he's the main character and Cranston's performance is great. Everyone else is just playing "dress up" as someone involved with …

No posts have been made on this movie yet. Be the first to start talking about Trumbo!