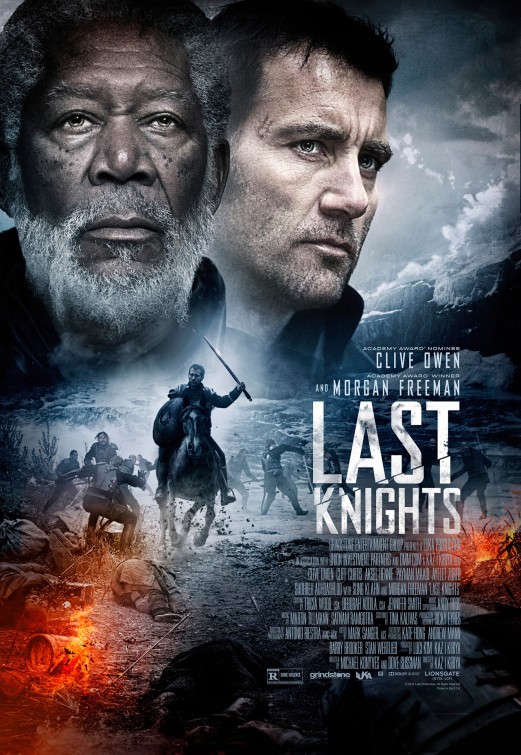 Plot: Intrigue for wealth makes a great warrior execute his master and then seek revenge upon those who conspired. -- travincal

Imagine pulling all of the direction and depth from "Lord of the Rings." Well, that's exactly what "Last Knights" feels like. It's painfully thin and disastrously uninspired.

A devoted retainer and follower of a strict code of honour is forced to execute his master by a corrupt and cruel politician. Last Knights is a kind of westernised version of the kind of thing upon which Zhang Yimou and his peers made their name. The story is a variation of the story of the 47 Ronin and the presence of Morgan Freeman and Clive Owen lend some star power to what is otherwise a rather workmanlike swords and sandals pot boiler. It is reasonably atmospheric with some nice locations and decent action sequences but as a whole it feels very much like a Game Of Thrones wannabe; unfortunately the script lacks the witty dialogue, interesting characters and emotional resonance of the hit TV show which has raised the bar sky high for this type of thing. But it is executed efficiently …

"This man, Gezza Mott, is a cancer, growing. And the only proper thing to do is to cut it out. You all know what I speak of."

It's been a while since I've seen this medieval epic action/drama. All I can remember is that the topic resembled that of "47 Ronin", except that it didn't concern samurais. I'm just wondering where this story really happened, because it seemed like it was situated in an oriental country (Something to do with the director perhaps ?). Everything revolves around loyalty, allegiance and revenge. Despite good leads, the end result is a weak film with an extremely slow pace. At the time the action was initiated and the apotheosis announced itself, I was already mentally in a coma. Although I'm a huge fantasy fan (sure, there were a lot of elements missing to make …

No posts have been made on this movie yet. Be the first to start talking about Last Knights!